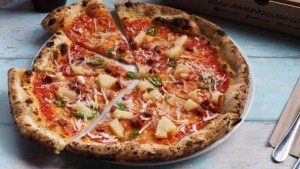 The plant-based meat icon, THIS, is debuting the UK’s ‘first’ vegan bacon Hawaiian pizza this summer.

Featuring the brand’s beloved THIS Isn’t Bacon Lardons, the pizza is a nod to the classic with a vegan twist.

And, the THIS says that it’s not only ‘deliciously retro, but ‘incredibly authentic’.

Moreover, the pizza – which is named the Fi(Ve) Oh – is now available at the independent South London restaurant, Mamma Dough.

The lardons will be served on a sourdough base with vegan cheese across Mamma Dough’s seven sites, such as Brixton, Tooting, and Peckham.

A spokesperson for THIS told PBN: “It’s wicked to be collab-ing on the UK’s first Hawaiian pizza with Mamma Dough.

“Pineapple on pizza can be controversial but this tastes undeniably lush.

“It’s also the first time our THIS Isn’t Bacon Lardons will be on menus which is exciting.”

Moreover, the lardons are ‘smoky, savory and crispy’, which the brand says makes them the perfect accompaniment to the sweetness of pineapple.

This is despite the ‘notoriously’ difficult task of creating a vegan bacon alternative with the right texture.

However, THIS Isn’t Bacon has already scooped awards since its launch less than two years ago.

Moreover, it boasted best-selling plant-based bacon status in Tesco. This was what led the brand to create the THIS Isn’t Bacon Lardons.

Mamma Dough’s Founder Jake Harrison said the outlet wanted to create a ‘one-of-a-kind plant-based pizza’ on its menus. So, the Fi(Ve) Oh Hawaiian pizza was born.

‘At Mamma Dough, we are all about great flavors and great taste. Whether you’re purely plant-based or a committed carnivore, there is something delicious for everyone on our menu’, he added.

This is a paid-for advertorial