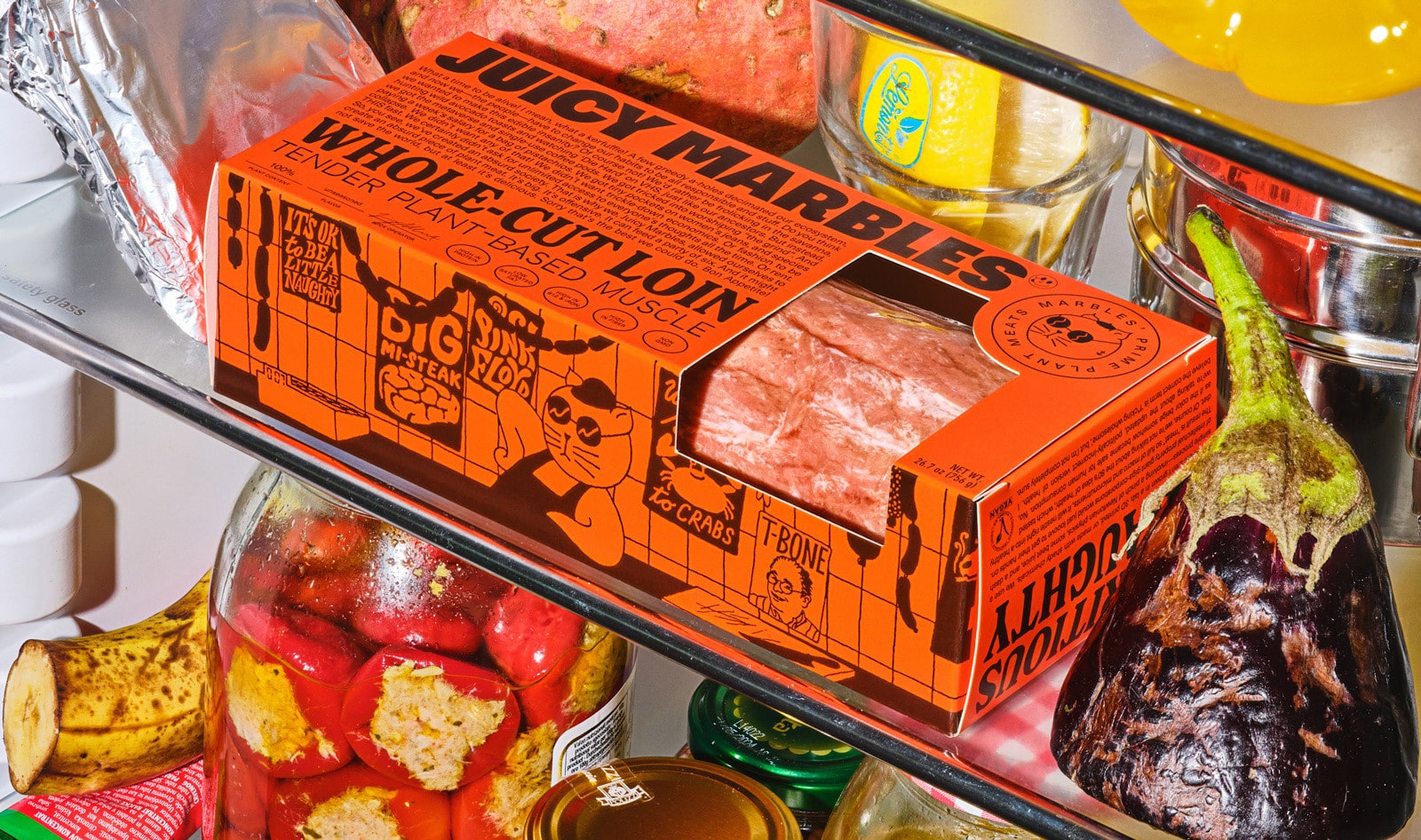 The juicy whole-cut tenderloin just got a vegan makeover thanks to innovative company Juicy Marbles. The company developed the 1.5-pound vegan tenderloin as an exciting center-of-the-plate option in time for the holiday season. Suggested uses include wrapping the vegan meat as the center of a Wellington, tied up as a roast, cut into multiple steaks, shredded as filling for tacos, and more.

Juicy Marbles’ innovative tenderloin is made using its proprietary technology (which it playfully calls “the Meat-o-matic Reverse Grinder TM 9000”) that layers soy proteins into linear fibers to create a toothsome meat that stands up to a variety of cooking techniques.

The meat—which Juicy Marbles describes as “the biggest, most insulting piece of plant meat ever conceived”—gets its red tint from beet juice and comes packed with macro and micronutrients. Cooking the “Tender Plant-Based Muscle” also results in a Maillard reaction or the browning that gives food delicious flavor.

“I hope it gives people an extra culinary tool … something that makes it a little easier to reduce dependence on animal protein. But that’s never our message,” Juicy Marbles Co-founder Vladimir Mićković tells VegNews. “A lofty dream I have is that people will stop comparing plant-based meats versus animal meats, and just start seeing ‘meats’ as a broader category of food, recognizable for its sensory experience, not the source of protein.”

A company with a sense of humor at its forefront, Juicy Marbles releases its new products in what it calls “meat leaks” and dropped 3,000 vegan tenderloins on its website ($60 for one plus $15 shipping; $165 for three and free shipping) earlier this month. It plans to release additional loins, along with recipes for preparing the plant-based meat, during the holiday season.

Juicy Marbles was founded in 2020 by Solevian entrepreneurs Mićković, Tilen Travnik, Luka Sincek, and Maj Hrovat. Collectively, the founders use their extensive knowledge of food technology, microbiology, and biotechnology to create meats that are fun and exciting, and that happen to be vegan.

Juicy Marbles’ latest tenderloin, which comes unseasoned and ready to cook, is the second product to drop after its flagship vegan filet mignon it released last year in the United States and Europe.

The Juicy Marbles team decided to release the whole-cut tenderloin format after observing how its customers prepared the vegan filet mignon and wondering what would happen if they gave them the meat in a massive, whole format to play with. This whole-cut gives customers the creative freedom to use the loin in new ways while cutting the cost of the vegan meat by approximately 10-percent per pound—a small, but meaningful discount for the young company that is looking to undercut the price of animal steak within the next few years.

As consumer dietary habits continue to evolve, Mićković hopes that Juicy Marbles’ vegan meats are embraced as part of an expanding protein category—not just thought of as alternatives to animal meat.

“Before just recently, we could only choose meat that is pig-based, cow-based, chicken-based, etc. … but in the last 10 years, our choices have broadened, and I think that makes now a great time for food,” he says. “What I fear, though, is that constantly attaching environmental and ethical issues to food will take away its magic.”

Ultimately, while product development at Juicy Marbles is quietly driven by the inevitability that the food system needs to evolve in a more ethical and environmentally friendly direction, the company’s aim is to deliver delicious plant meats, period.

While developing viable plant-based options to animal proteins provides great value, Mićković explains that attaching health, ethics, or sustainability halos to plant-based meats makes them “heavy” in a way that could diminish the enjoyment that good food delivers.

“If people read about plant-based meats only through the lens of sustainability, ethics, and science, it will take longer to stop seeing it as an activist tool, as opposed to seeing it as just another tasty member of the broader food family,” Mićković says.

The tenderloin is not made to replace Juicy Marbles’ vegan filet mignon steaks, which are slated to make a comeback along with new products that are currently under wraps, along with a forthcoming book.

Juicy Marbles is also working to put its innovative vegan meats on restaurant menus and just launched a landing page on its website for food operators who are curious about its products. “We’re finally ready to supply restaurants,” Mićković says. “[Our] baby company has come to the stage of growth where it wants to go out and explore.”