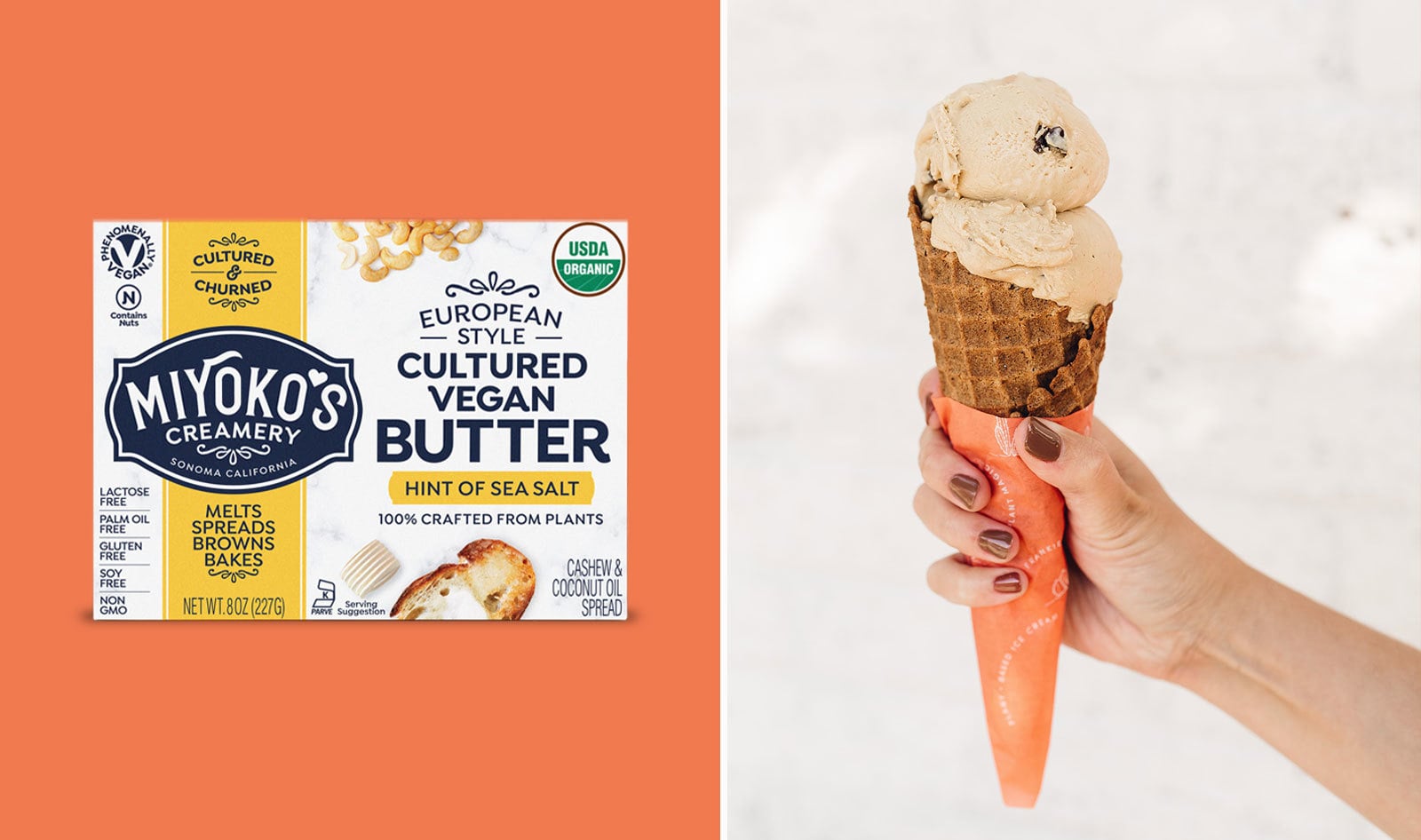 The ice cream is available to ship nationwide as well as in Frankie & Jo’s Seattle-based scoop shops until November 2. The ice cream can be ordered through the brand’s website and is delivered straight to customers’ doorsteps on Tuesdays in a box packed with dry ice to keep the treat perfectly frozen.

Frankie & Jo’s had always considered Miyoko’s Creamery to be a pioneer in the vegan movement and a company that the ice cream brand looked to for inspiration on how to change consumers’ minds about dairy, so it was a logical partnership to use Miyoko’s product in one of their ice cream flavors. When planning for the October seasonal flavors this year, Frankie & Jo’s creative team was dreaming of making a candy bar ice cream and developed countless versions of a butter toffee ice cream.

“After testing other vegan butters for a chocolate-covered toffee inclusion in our ice cream, we decided that Miyoko’s Creamery made the perfect version that was up to our standards,” Jenn Rea, Frankie & Jo’s marketing manager, told VegNews. “We reached out to see if they were interested in partnering with us, and Miyoko herself was able to taste the ice cream and give it her stamp of approval, and our partnership was born.”

Miyoko’s Creamery founder and CEO Miyoko Schinner launched her company in 2014 and it has since become a pioneer within the vegan movement helping to build a future where an animal-free dairy food system is a reality. By combining old-world creamery traditions with new, innovative technology, Miyoko’s Creamery has revolutionized the cheese and butter categories, demonstrating how plant dairy is, in fact, dairy.

Last year, a US district court sided with Miyoko’s Creamery, preventing the State of California from enforcing its demands that the vegan brand cease using the terms “butter,” “lactose-free,” and “cruelty-free” on its products—setting a precedent for other companies looking for free speech protections on terms dairy lobbyists have fought to reserve for animal secretions.

The brand has developed more than 25 plant-based cheeses and butters that can be found at nearly 20,000 retailers nationwide, including Whole Foods, Target, Trader Joe’s, and Walmart.

One of its latest developments is a pourable mozzarella made specifically for pizza. The brand’s European-Style Cultured Vegan Butter for cooking and baking launched in 2016 and the line has since expanded to include Spreadable Cultured Vegan Oat Milk Butter and Spreadable Cultured Vegan Garlic Parm Oat Milk Butter. Miyoko’s Creamery is now expanding into the foodservice sector. In August, the company secured $52 million in a series C funding round, which will allow the company to finance the expansion as well as hire up to an additional 10 research and development employees.

“We are so excited by our collaboration with Frankie & Jo’s. They came to us with the idea to create a seasonal ice cream featuring Miyoko’s European Style Cultured Vegan Butter—and Miyoko’s Butter Toffee & Chocolate was born, perfect for the fall,” Schinner told VegNews. “We couldn’t be more excited about the outcome of this delicious flavor. Partnering with like-minded brands who are on the same mission to inspire, do good, and use plants creatively in foods is how we grow this community and create the future of food.”