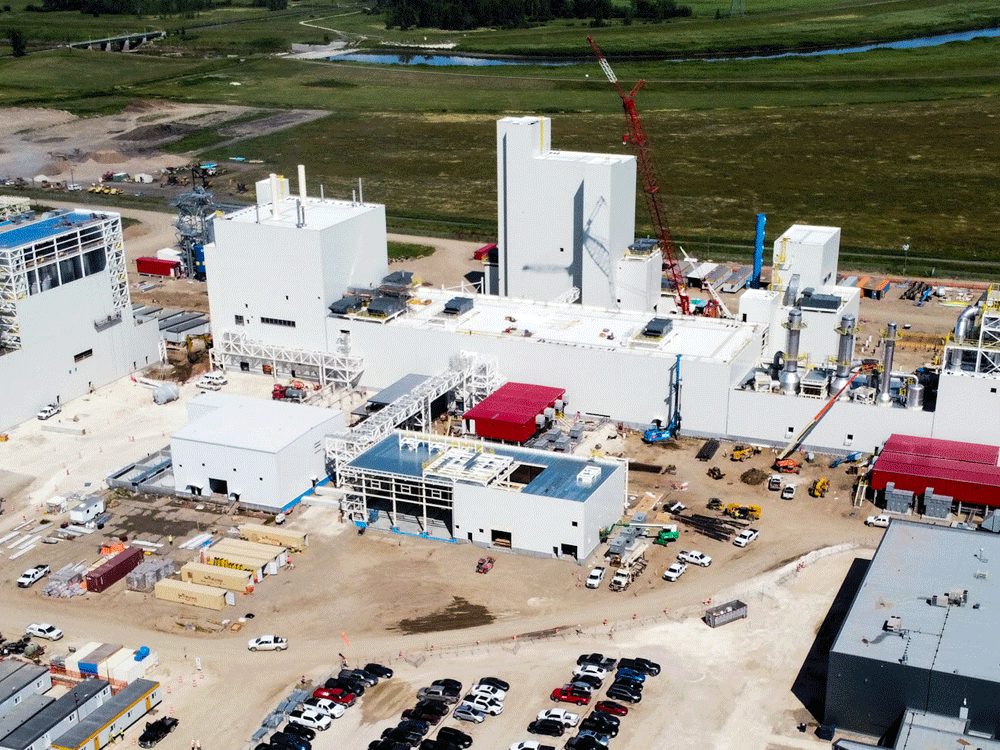 An industrial complex sprawling across a 67-acre lot in rural Manitoba has more than 60 kilometres of pipe connecting silos, grinders and spray dryers, all devoted entirely to the pea. The plant in Portage la Prairie, Man. — an hour or so west of Winnipeg — is so singularly focused on this one crop that its optical sorting system can spot a soybean in a sea of peas and get rid of it.

“We absolutely have a very strict specification about having no soy beans in our peas,” said Dominique Baumann, the chief executive who runs the Canadian operations of France-based food processing giant Roquette Frères SA.

The reason for such vigilance, he said, is that a genetically modified soybean would taint the plant’s non-GMO product.

Roquette chose Portage la Prairie for the more-than-$600-million plant, in part, because peas are grown in abundance in Manitoba and Saskatchewan. Peas are big business, especially now that the protein extracted from them has become a main ingredient used by the burgeoning plant-based protein industry.

The pea, it turns out, is not just a mere pea. It is starch, fibre and protein, and each component has a use and a market: the starch can be used for glue in cardboard boxes; the fibre can go into livestock feed and pet food; and, of course, the protein is destined for everything from veggie burgers and dairy substitutes to nutritional bars and shakes.

As Baumann put it, nature has put the pea together and it’s the plant’s job to break it apart.

The Portage la Prairie operation, expected to be operating at full capacity by early next year, comes up a lot in discussions on the future of how Canada feeds itself. It is considered by many to be one of the best examples of this country’s modern manufacturing power. But it’s also a rare example.

It’s rare, some in the industry believe, because over-regulation, labour shortages and heavy concentration in the grocery business have historically tamped down Canada’s ability to process what it grows, leaving the country dependent on other countries to turn crops into food. That dependence can be precarious, especially in uncertain times that send shock waves rippling through global supply lines and countries grow reluctant to share.

Much of Canada’s food processing infrastructure is aging and understaffed, due in part to a slow procession of multinational manufacturers relocating their Canadian operations to countries with less regulation and longer growing seasons.

More than half of all the crops and livestock produced in Canada are now exported to another country to be processed, according to a report last week by the parliamentary standing committee on agriculture and agri-food.

Processed food, for many, may sound like junk food — say, chicken parts blitzed with additives to form nuggets. But in the agricultural sector, processed food involves anything that adds value to a raw material. For example, crushing canola seeds into oil is processing, as is freezing corn niblets or canning beans.

For a country so rich in raw materials, untapped processing potential means untapped value. But more importantly, it can make the national food chain more vulnerable.

It’s normal for an agricultural powerhouse with a small population to export a lot of its crops. But it’s concerning that Canada then re-imports some of those commodities after they’ve been processed abroad, said Martin Scanlon, dean of agricultural and food sciences at the University of Manitoba in Winnipeg.

“The degree of reliance on imported (processed) foods has been growing steadily for the past 15 years,” he said. “When you’ve got these plants that are rusting out, if I can call it that, we’re not seeing the degree of sophisticated processing reinvestment that you would see in a plant south of the border.”

Complications in the food chain at the beginning of the pandemic last year, including outbreaks at two meat-packing plants that process the majority of Canada’s beef, have underscored the need to have more smaller plants spread out across the country, he said.

As the pandemic crawls toward a conclusion, Scanlon said it’s time to “look at our food system and say, ‘Is it what we actually want?'”

Canada’s food manufacturing sector lost roughly 40,000 jobs to plant closures in the past decade, while adding only 20 new plants with national processing capacity compared to 4,000 added in the U.S., according to a study last week by the Agri-Food Analytics Lab at Halifax’s Dalhousie University, one that was commissioned by manufacturing lobby group Food, Health and Consumer Products of Canada.

Foreign direct investment in the sector grew by 125 per cent in the past 10 years, the report said, though it also found that a lack of greenfield investments had contributed to “stunted innovation” and aging infrastructure.

“I think the sector, overall, has been undermined for several decades,” said Sylvain Charlebois, the lab’s director.

One executive at a Canadian food processor said state officials from the U.S. frequently offer tax cuts or free government land if a company relocates their operations south.

“I don’t go a week without getting an offer from somewhere in the U.S. to move our facility,” said the executive, who spoke on condition of anonymity.

Maple Leaf Foods Inc. told the parliamentary agriculture committee that “the cumulative effect of regulation” in Canada was a factor in why it chose Indiana to build a US$310-million facility for plant-based protein, according to the committee’s report last week.

The committee also noted that frozen vegetable processor Bonduelle Americas has “given up on projects in Canada” due to a lack of labour in the industry, which has a reported 28,000 vacancies.

Food processors in Canada have also spent much of the pandemic locked in an ugly and prolonged battle over the fees and fines that big grocers charge.

Last year, Walmart Inc. and Loblaw Cos. Ltd. riled food suppliers by charging new fees as a way to help cover investments in infrastructure and online grocery shopping, which has boomed during the pandemic.

The retailers argued that suppliers would benefit from sales gains brought about by the e-commerce investments. But the fees marked a flashpoint for processors, who were already frustrated by the charges and fines they were obligated to pay in order to do business with the biggest grocery chains.

Some manufacturers, including Toronto-based dairy processing giant Lactalis Canada Inc., have threatened to stop shipping products if retailers continue to charge fines for short shipments despite pandemic-related hurdles in factories.

Processors have been pushing Ottawa to implement a code of conduct to curtail what they say are bully tactics and unfair fees in the grocery business. Late last year, the federal, provincial and territorial agriculture ministers group (FPT) decided to investigate the issue.

Last week, the parliamentary agriculture committee delivered another milestone in the campaign for grocery regulation when it released its report on food processing after months of studying ways to boost Canada’s ability “to process more of the food it produces domestically.”

The report endorsed a national code of conduct, calling on the federal government to work with the provinces and territories to make it happen.

“Food processors are dealing with a concentrated retail market in Canada that is dominated by a few large retailers,” the report said, adding that the top five grocery chains control 80 per cent of sales.

The office of Agriculture Minister Marie-Claude Bibeau, who is co-chairing the FPT working group on grocery fees, said her investigation will take the recommendation into account before making its own report in July.

The Retail Council of Canada, which represents the big grocers, said it is currently working with other food-sector trade associations in hopes of proposing their own set of “structured policies and principles” that would reflect the “needs and concerns of small, domestic companies in the supply chain,” spokesperson Michelle Wasylyshen said in an email.

Reining in bully tactics in the grocery business could help preserve the Canadian operations of multinational food processors, according to one executive.

The head of a Canadian division of a global food processor, who spoke on condition he not be named for fear of damaging sales relationships, said his business often underperforms those in other markets, putting Canada at a disadvantage when head office has to make budget decisions.

“They say, ‘Listen, you know what? We can’t invest as much money in Canada because your profit margins are lower. We can make more money in France, U.K., Germany, whatever,’” he said. “When a worldwide organization looks at Canada, they’re gonna say: ‘It’s a small country. Forget about the landmass; 38 million people?’”

The pandemic has proven to multinationals that their workforces can be remotely managed, which puts underperforming divisions with small populations in jeopardy, the executive said, since the company could feasibly manage the country from its head office elsewhere.

“As opposed to having all of the senior marketing managers, logistics managers, maybe even a president out of Canada, I can hire lower staff individuals and run it out of the United States,” he said. The question becomes: “Why do I need you guys?”

But the bigger question, the one now being asked in earnest, is what would it really take for Canada to be self-sufficient, to cut, crush and cook everything we eat? It’s a question that requires an answer before another crisis hits the food chain.