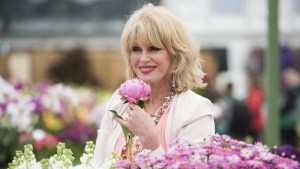 Actor and animal rights campaigner Joanna Lumley has been made a dame in the Queen’s New Year Honors list. It comes just weeks after vegan Formula One star Lewis Hamilton received his knighthood.

Lumley was granted the title for her services to drama, entertainment, and charitable causes, BBC News reports. The star has placed her support behind a number of animal welfare campaigns, speaking out about animal testing, the fur trade, and factory farming.

The Absolutely Fabulous actor, who has snagged four BAFTA Awards, told BBC she was “thrilled to bits” by the news.

“It was an extraordinary shock,” she said. “I put my head in my hands and sobbed like a baby.

“Then I thought, how has this happened? Is it a mistake? I truly was completely thrown by it, and thrilled to bits, and so touched.”

Lumley, 75, has been vegetarian for more than 40 years.

The seed was first planted in the 1970s, she revealed to PETA. “I was eating a steak, and I looked down and for the first time it suddenly looked like flesh to me—like a dead creature. In a flash, I realized that every time I ate any kind of meat, something had been killed for me, and I stopped eating all animals, not just cows and pigs but chickens and fish. I feel so much happier not being a part of the blood chain. ”

This year, the actor is participating in Veganuary, the 31-day pledge to go vegan for January.

“Veganuary’s mission is to make the world a kinder, safer, happier place for all, which makes their January campaign utterly irresistible,” she said in a statement. “I’m in awe of every single person taking part for the climate, our rivers and oceans, forests and wild places, animals, and people. You’re all angels.”

“I don’t like the idea of any creature having to lose its life to keep me alive,” she told The Times in March.

“Start small and ease your way into it,” she encouraged. “In no time, you’ll be eating such delicious food you won’t miss meat. I’m obviously 112 and a grandmother, but I’m as fit as a flea.”

“My mother taught me from a young age that the world belongs to every creature on it,” she later added. “Every single thing deserves respect. I learnt to handle spiders, snakes, even a slug. I kept a pet mouse at school that used to run under my jacket.”

Speaking about sustainability, she noted: “We have taken our eye off the ball on the threat to the environment.” And doing your bit “doesn’t have to inconvenient, time-consuming or expensive,” Lumley said. “It’s just a matter of changing ingrained habits, one bit at a time.

“Make things from scratch, reduce your food miles, cut back on food waste and, most of all, cut back on your use of plastic, so there’s not a floating plastic soup in the ocean. Ditch fast fashion. I was raised to reduce, reuse, recycle.”

The post The Queen Makes Joanna Lumley A Dame For Entertainment And Charitable Causes appeared first on Plant Based News.