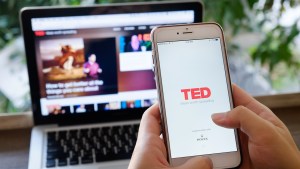 Global media platform TED has declined to post a talk that touts the benefits of the carnivorous “Lion Diet.”

Speaker Mikhaila Peterson, who claims eating nothing meat reversed her autoimmune disorder, instead shared the video to YouTube. There, she stressed that “this is something that should be taken seriously.”

Peterson – CEO of a brand called The Lion Diet – performed the speech at an independently organized TEDx event in Roseville, California.

During the talk, Peterson told audience members about her lengthy battles with a multitude of health issues. Some of her complaints started at just two-years-old. And when she was 17, Peterson had her hip and ankle replaced, she said.

“I’m here to talk about how I put my idiopathic autoimmune disorder, and mood disorder, and chronic fatigue into remission,” said Peterson, who hosts an eponymously named podcast.

The key? No fruits, vegetables, nuts, or legumes. Just “beef, lamb, salt, and water,” she stated.

Peterson suggested eliminating most foods from her diet helped free her from “crippling arthritis,” as well as mouth ulcers, rashes, and itchiness. Further, her meat-only lifestyle also tackled her depression, anxiety, and visual hallucinations, she said.

The animal meat diet has helped other people too, Peterson claims.

Jordan, now an advocate of the lifestyle too, has been at the center of his fair share of controversy. Jordan made headlines in recent years due to his vocal disapproval of transgender rights and parts of the modern feminist movement. In 2018, The Guardian warned that the professor’s “pseudo-facts” are “dangerous.”

During her TED talk, Peterson acknowledged that her proof is purely anecdotal.

“I’ve been talking about this diet to spread awareness in hopes that the medical community can take something like this seriously,” she explained.

“I’ve talked to thousands of people with autoimmune disorders who have done similar things and seen similar results.”

She later added: “It’s not cool to be this restricted and it’s not cool to have an autoimmune disorder. And people who are sick feel isolated and miserable. So I’m trying to make it cool. But what would be really cool would be if the medical community could take this seriously and do some case studies. That’s it.”

Peterson’s presentation was met with a standing ovation, but the media giant TED seemed less impressed.

Out of all of the talks delivered at that particiular TEDx conference, Peterson said in her YouTube video, hers is the only one that the media organization “refused to post.”

The Lion Diet founder said she went “back and fourth” with TEDx for four months in an attempt to persuade the company to share her content.

In what appears to be an email sent to Peterson, the organization wrote that the talk “did not adhere to our content guidelines and will not be added to the TEDx channel at this time.

“We are especially mindful of talks that discuss health and healing, particularly in the context of incurable disease, to ensure no audience members misinterpret the idea. While speakers can be honest about their personal interpretation and experiences, nuance is incredibly important when discussing illness and disease.

“While it may not be a speaker’s intention to offer a prescription, using anecdotal evidence without sufficient scientific support poses special concern, particularly when it’s used to speculate on the cause, cure, or treatment of disease.”

Indeed, the company’s website confirms that its platforms are for shining a light on “genuine advances in science that are backed by research.”

Peterson, whose YouTube video on the topic has amassed more than 615,000 views in four days, pointed to one study that she says supports her claims.

The research was published in November 2021. It looked at 2,029 adults who had been consuming a completely or mostly carnivorous diet for at least six months. Eighty-three percent of participants were white, and 67 percent were male.

On average, most (85 percent) of respondents consumed red meat at least once a day. This opposes the nutrition recommendations of a majority of health bodies around the world. Namely, due to red meat’s links to heart disease and cancer.

Fewer than 10 percent of participants said they eat vegetables, fruits, or grains more than once a month.

Further, 37 percent said they never take vitamin supplements; it’s not clear whether the supplements taken by most other participants contained plant-based ingredients. More than 67 percent occasionally made “exceptions from the carnivore diet.”

A vast majority (95 percent) reported improvements in their overall health after adopting the diet.

The researchers noted that the results contradict previous studies. And that their findings must be “interpreted cautiously” due to the presence of “several major design limitations.”

For instance, the study based its findings on self-reported data. Researchers looked at the “perception of individuals,” and did not “objectively assess diet, nutrient status, health-related outcomes, or confounding health-associated behaviors,” the paper confirms. Moreover, researchers did not complete any physiological or biochemical measurements.

Because of this, data could be influenced by recall and reporting bias, researchers said.

“Specifically, participants may have started the diet during a time of poor health and perceived subsequent regression to the mean as a benefit of the diet and being online community members may have resulted in over-reporting of adherence and perceived beneficial effects,” they explained. One such online group, the World Carnivore Tribe on Facebook, has upwards of 57,000 members.

Additionally, respondents generally reported high levels of other health-centered behaviors, such as physical activity, and very low intakes of alcohol and processed foods. These factors could also contribute to the findings.

The paper’s notes section includes several disclosures from the researchers involved. Two of the four study authors – Belinda Lennerz and Owen Henn, who were in charge of conducting and analyzing the data – received grants from the National Institute of Diabetes and Digestive and Kidney Diseases.

The institute is a part of the US’ National Institutes of Health (NIH), which has come under fire in recent months due to its link to gruesome taxpayer-funded experiments on dogs and monkeys.

The National Center for Complementary and Integrative Health, which is also part of the NIH, funded another study author, Jacob Mey. The final author, David Ludwig, disclosed that he reports royalties for books that recommend carbohydrate-modified diets. He too has received a number of grants from the NIH.

Peterson, who has nearly half a million YouTube subscribers, pointed out in her video that TEDx has shared many talks that promote veganism. Notably, in October 2021, TED held its first-ever in-person climate conference, and only served vegan food.

In recent years, a ballooning number of researchers have uncovered the benefits of a plant-based diet.

A study published this month, for example, found that eating less meat and dairy and more plant-based foods could add 10 years to one’s lifespan.

Separate research from 2021, which studied 10,000 participants, discovered that plant-based diets can cut the risk of heart disease, stroke, and type 2 diabetes.

The post ‘The Lion Diet’ Founder Hits Out At TED For Promoting Veganism Over Meat-Only Diet appeared first on Plant Based News.