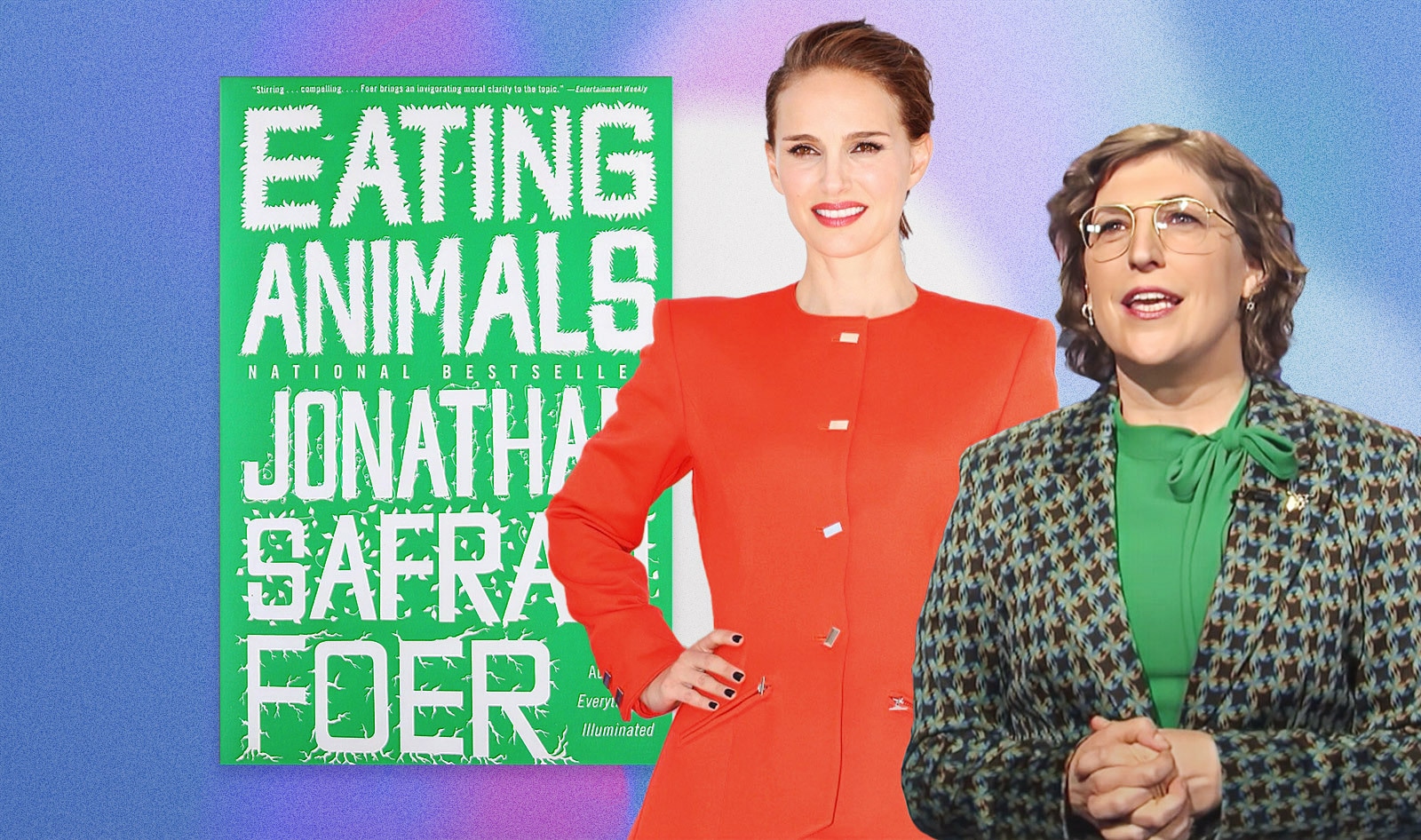 Since its publication 14 years ago, Jonathan Safran Foer’s book Eating Animals has been an influential force in helping countless people reduce their consumption of animal products, including some recognizable names. In the non-fiction book, Foer explores the hidden cruel world of animal agriculture through investigative reporting and personal story-telling, all in an attempt to answer whether or not eating animals is acceptable for him and his growing family.

Over the course of the last 14 years, Foer’s harrowing findings have helped many celebrities ask themselves the same question, including actress Natalie Portman. Vegetarian since the age of nine, Portman went vegan in 2011 after reading Eating Animals and has been a vocal vegan advocate and investor in plant-based businesses ever since.

Will Davidson for Parfums Christian Dior

Portman was so moved by Foer’s book that she contacted the author to create a documentary adaptation of Eating Animals which debuted at the Telluride Film Festival in Colorado in 2017.

The impact of Eating Animals on celebrity diets

Another celebrity known for her vegan lifestyle is Mayim Bialik, star of popular series Blossom and The Big Bang Theory, and the current host of Jeopardy! Bialik followed a vegetarian diet since age 19 but eschewed animal products completely after reading Eating Animals.

The book helped set Bialik on a vegan journey that would inspire her to author a cookbook, Mayim’s Vegan Table, in 2014. She also teamed up with longtime friend Allison Crudas to open a vegan restaurant Bodhi Bowl in Downtown Los Angeles.

Actress Anne Hathaway previously credited Eating Animals for sparking the decision to rethink her relationship with eating meat. While Hathaway maintained a vegetarian diet for years, she incorporated fish into her diet in 2014. In preparation for her role in the 2022 WeWork-inspired dramatic series WeCrashed, Hathaway adopted a raw vegan diet to get into the headspace of her character, Rebekah Neumann.

In March 2022, Hathaway appeared on The Late Show With Stephen Colbert, during which she discussed that in eating a raw vegan diet, she began to identify with being vegan. “I think I’m a vegan now,” Hathaway said on the show in reference to embodying the character. “Like, I think this is it … I know I’ve done it before and I know it’s never stuck but I think this is the time that I’m doing it.”

Hathaway has since incorporated meat back into her diet but continues to support plant-based eating. “It’s great,” she said on the show. “And we should do as much as we can to eat vegetables for the environment.”

Foer’s book was also influential for actress Drew Barrymore who grew up as a vegetarian but began eating meat again in her mid-20s. Barrymore cites reading Eating Animals as the reason why she removed chicken from her diet.

Since last year, Barrymore has worked with Quorn as its Chief Mom Officer to promote its meatless products, including mycoprotein-based chicken. These products have allowed Barrymore to incorporate a familiar protein back into her and her family’s diets without abandoning the ethical concerns she adopted after reading Eating Animals.

“You can have these moments when you find out certain things and you cannot ignore what you just learned,” Barrymore told VegNews last May. “So, I love chicken. It’s a great base protein and a canvas for so many things and so ubiquitous in the culinary world and I haven’t touched it in 13 years.”

Eating Animals: a book with the power to change minds

The influence of Foer’s book stretches beyond its impact of Eating Animals on celebrity dietary habits and has helped set other concepts into motion. Longtime animal-rights activist and co-founder of vegan company The Better Meat Co. Paul Shapiro credits the narrative style of Eating Animals as inspiration for his own book Clean Meat—a non-fiction work about the rise of the cultured meat industry.

“Often, the books that have the biggest impact are stories: think Uncle Tom’s Cabin, Brave New World, 1984, and Animal Farm. Even the Bible is a collection of stories,” Shapiro—who attended the same high school as Foer—tells VegNews. “But sometimes, non-fiction books are told as stories, and that’s one reason I think a book like Jonathan’s has had such an impact. His expertise in narrative story-telling is powerful.”

In addition to penning Eating Animals, Foer has authored multiple titles, including We Are the Weather: Saving the Planet Starts at Breakfast—a non-fiction book about the effects of diet on the climate crisis.

In 2020, Foer also penned a moving op-ed for The New York Times in which he discussed the dangers of continuing to consume animals in light of the COVID-19 pandemic.

“​​With the horror of pandemic pressing from behind, and the new questioning of what is essential, we can now see the door that was always there,” Foer wrote. “As in a dream where our homes have rooms unknown to our waking selves, we can sense there is a better way of eating, a life closer to our values. On the other side is not something new, but something that calls from the past—a world in which farmers were not myths, tortured bodies were not food, and the planet was not the bill at the end of the meal.”