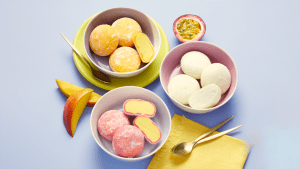 Earlier this year, Little Moons took the internet by storm with its Japanese-inspired desserts, selling out in supermarkets across the UK.

At the time of writing, the hashtag ‘Little Moons’ currently has a staggering 290.3 million views on TikTok.

Mochi is a bite-sized treat consisting of ice cream wrapped in a gelatinous dough made from rice flour.

Little Moons offers a wide range of flavors including Coconut, Cookie Dough, and Pistachio. However, its only vegan-friendly offerings are Passionfruit and Mango and Belgian Chocolate.

Now, budget retailer Aldi is launching its own version of the popular dessert. They’re priced competitively at just £2.99 for a box of six.

Aldi’s Wao Mochi Balls range debuts on May 17 and consists of three flavors: Coconut, Tropical, and Mango. Only the Mango and Tropical balls are suitable for vegans.

“With over 15,000 mochi-themed videos now available on TikTok… It’s no wonder it’s been tipped as the ice cream trend of the summer,” Aldi said.

“The moon-shaped dessert is mochi in demand by shoppers, with some mochi brands reporting sales skyrocketing by 2,000 percent since January.

“Not only have Tik Tok fans been ice-screaming for more mochi balls, but former First Lady Michelle Obama has chosen them as a trusty co-host in her newly launched cooking show for kids, Waffles and Mochi.”