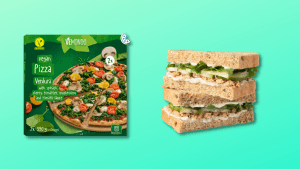 In just two days, the world will embrace the annual vegan challenge of giving up meat and dairy for the 31 days of January. Veganuary is set to be bigger than ever in 2022, and yet again, big brands are jumping on board.

As of this week, the UK is leading with the likes of Subway, Papa John’s, Starbucks, and Lidl extending vegan-friendly options.

Here is everything you need to know so you won’t miss out on major companies debuting plant-based treats to make the Veganuary pledge ever more delicious.

Two new vegan-friendly options are soon to adorn menus at British Subway outlets, as the company increases its meat and dairy-free offerings.

Just a week ago, rumors circled that global sandwich giant Subway was to release a new vegan chicken sub. Now, it’s been confirmed that customers in the UK will be able to order a tikka sub this Veganuary branded the T.L.C Tikka aka Tastes. Like. Chicken. sub.

Additionally, the chain will trial a plant-based steak sub the following month. The T.L.S Tastes. Like. Steak sub will launch in 350 stores across the south of England from February 15.

Speaking on the news, Subway’s head of marketing for the UK and Ireland, Mays Elansari, said: “Our new plant-based T.L.C. Tikka and T.L.S. taste so delicious that vegans, flexitarians, and non-vegans will love them!

“At Subway, we are proud to have one of the widest and tastiest ranges of plant-based choices on the high street, without any compromise on flavor or taste, to offer our guests even more choice.”

Toni Vernelli of Veganuary echoed the sentiments. She stressed the importance of having lots of plant-based choices to make being vegan “a little easier and a lot more enjoyable.”

The vegan offerings are available from December 29.

American pizza chain, Papa John’s is combining the joy of the all-day-fry-up with vegan pizza.

Announced over Christmas, the company revealed the popular item would be returning, and this time it’s available vegan too.

It’s here as a limited edition in the UK.

Ahead of the news that Starbucks is dropping its plant milk upcharge in the UK this week, the company made a further positive announcement for vegans.

This includes the launch of its first plant-based fish alternative, the Tu’NAH Sandwich. Made with The Vegetarian Butcher’s vegan fish, the offering features red onion, cucumber, rocket, and vegan mayonnaise.

Moreover, in the new year, the chain will bring on board three new oat milk beverages.

From January 5, 2022, Strawberry & Vanilla, Dark Cocoa & Orange, and Honey & Hazlenut will launch in UK stores. However, the Honey and Hazlenut flavor is not vegan-friendly.

A new plant-based pecan and caramel brownie – featuring chocolate chunks, gooey caramel, and caramelized pecans – is also on its way.

They’re available for a limited time only.

German discount supermarket giant, Lidl, has announced a stellar vegan range for UK customers as part of Veganuary next month.

The launch includes vegan salami, spinach and mushroom, and kale and basil puree pizzas as well as fried cauliflower and broccoli bites.

Lidl will also add a Vegan Tortilla to its vegan offerings, and sausage slices: Vegan Cold Cuts, priced at £1.99 and 99p.

You can view the full range via Lidl’s website here

Following a major vegan Christmas launch, Aldi is stepping up its vegan offerings into the New Year as well.

Customers in the UK have already spotted Chocolate Orange Brownies and Banana Blondies under the store’s plant-based range, Plant Menu.