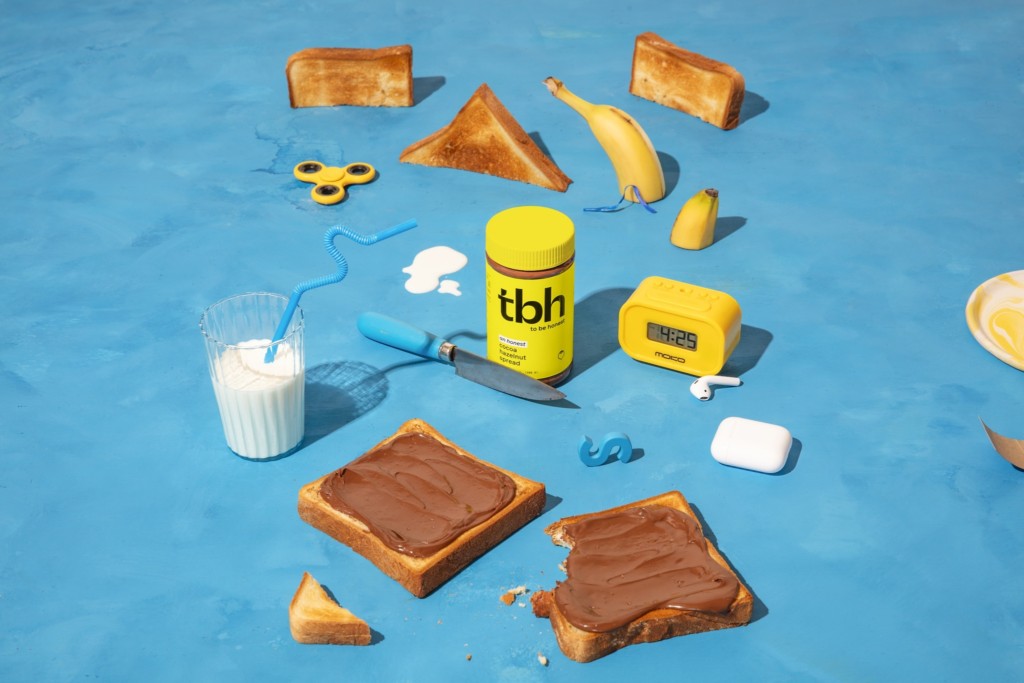 TBH is a brand new, better-for-you hazelnut cocoa spread from Founder and Chief Snacking Officer Noah Schnapp. Launching on November 1, TBH is a game-changing snack that not only tastes great, but does good for the planet, too.

Noah grew up as a lifelong fan of the world’s most consumed hazelnut spread. He was shocked when he learned that its first ingredient was sugar and its second ingredient was palm oil – and that harvesting palm oil is a leading cause of deforestation and habitat destruction. Once he realized how bad this traditional brand was for his health and the environment, Noah went looking for an ecofriendly alternative. While some were available, nothing lived up to the indulgent taste he was craving. Inspired, Noah followed his entrepreneurial spirit and teamed up with the folks at Umana Venture Studios, a firm dedicated to building purpose-driven brands, to create TBH.

TBH is a vegan, non-GMO, gluten-free, kosher hazelnut cocoa spread that has three times more protein and 50 percent less sugar than other hazelnut spreads. Best of all, hazelnuts are the first ingredient and there is zero palm oil. With organic sugar and organic cocoa powder, each jar of TBH is a guiltless pleasure that can be enjoyed on toast, in baked goods, as a dip or even just on its own.

As conscious consumers who shop with sustainability in mind, Gen Z has the spending power to make a difference by choosing products that align with their values. Noah designed TBH with his peers in mind, redefining snacking habits with a version of hazelnut spread that is better for people and planet. Through his platform, Noah showcases how Gen Z entrepreneurs can change the world simply by changing what’s in our pantry, inspiring the next generation of snackers to take action and choose honest, transparent products.

“TBH is inspired by honesty. It’s about being transparent with ourselves about what we’re actually consuming, and then making a change for the better,” shares TBH Chief Snacking Officer Noah Schnapp. “Hazelnut spread on toast has always been my favorite comfort food, but of course, when I was a kid, I didn’t realize that my snack habit wasn’t very good for me or the environment. Once I found that out, I wanted to create a new take on hazelnut cocoa spread with honesty and sustainability at its heart, and found the perfect team to help that vision come to life. We’ve been working on it for over a year, and I’m grateful to finally share it with other snackers like me. I feel lucky to be in a position where I can help my generation make a difference through simple pantry swaps like TBH.”

Available exclusively online at www.snacktbh.com and at rotating Showfields locations in NYC and Miami, each jar arrives in sustainable packaging, including a jar made of recycled materials and a box that plants 20 times more trees than it takes to create.

When celebrity and “Stranger Things” leading actor Noah Schnapp learned that his favorite snack was destroying the environment, he felt responsible to make a change. Together with his team at Umana Venture Studios, a firm dedicated to building purpose-driven brands, Noah created TBH: a better-for-you hazelnut cocoa spread that’s better for the planet, too. Thanks to its high-quality ingredients and refusal to use habitat-destroying additives like palm oil, TBH is a vegan, non-GMO, gluten-free spread that redefines healthy snacking habits and delivers a new take on a childhood favorite. As a Gen Z founder, Noah led the design and creation of TBH not only to give himself something tasty for his toast, but also to give the next generation of snackers the power to protect the planet through conscious choices. TBH can be found online or at Showfields locations across the US and online. More information about TBH can be found at www.snacktbh.com  or on Instagram @SnackTBH.

In addition to developing TBH, Noah Schnapp is an award-winning Canadian-American actor, best known for his role as Will Byers in the Netflix science fiction horror streaming television series, Stranger Things, for which he won the Screen Actors Guild Award for Outstanding Performance by an Ensemble in a Drama Series with his fellow cast members, amongst many other achievements. The young actor’s additional film credits include Steven Spielberg’s Oscar-winning thriller “Bridge of Spies” and voicing the role of the iconic ‘Charlie Brown’ in the Fox feature film, “The Peanuts Movie,” which was later nominated for a Golden Globe Award for Best Animated Feature. Schnapp is currently starring in several movies that are under production.