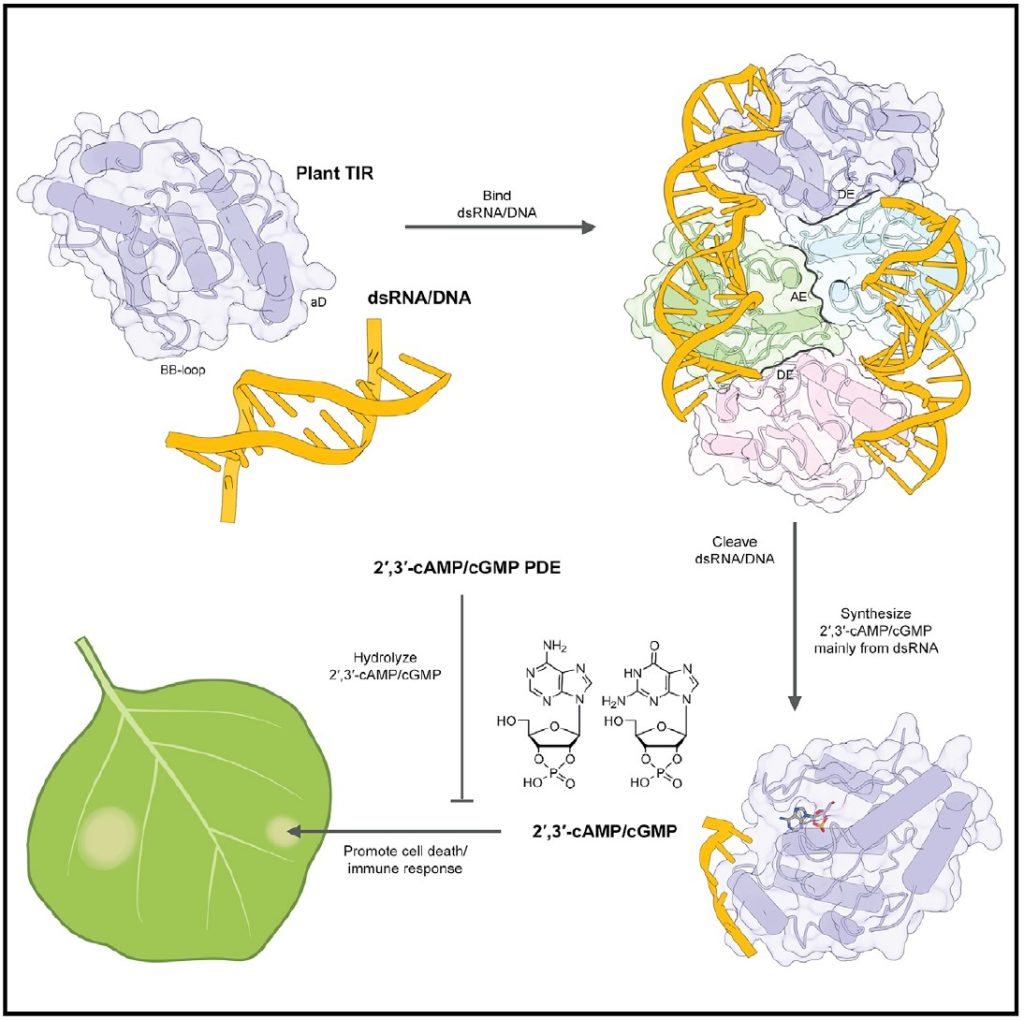 A recent study reported the discovery of a new mechanism that enables plants to fight against microbial infections.

Earlier studies have shown that breaking down NAD+ (nicotinamide adenine dinucleotide), a ubiquitous and abundant cellular cofactor, activates immune proteins, culminating in a “hypersensitive response” that kills infected plant cells to protect the overall plant. This process, while essential, is however not enough to protect a plant from invading microbes, and suggests the presence of other mechanisms.

PhD student Dongli Yu and research scientist Wen Song, PhD, from the Max Planck Institute for Plant Breeding Research (MPIPZ), in Germany, and Eddie Yong Jun Tan, a student from the Nanyang Technological University in Singapore, all three co-lead authors of the study, noted, “We have identified a new role for the TIR domain of immune receptors in protecting plants against infection. Looking forward, identifying, and characterizing the targets of 2′,3′-cAMP/cGMP will suggest novel strategies for making plants more resistant to harmful microbes and in this way contribute to food security.”

In the current study, the team characterized the function of TIR proteins. Besides being NAD+ nucleosidases, the team showed TIR domains can process high-energy phosphodiester bonds typically found in RNA and DNA.

Using structural analysis and cryo-electron microscopy, the authors showed that TIR proteins form distinct, mutually exclusive, multi-protein structures when hydrolyzing NAD+ versus when cleaving phosphodiester bonds in double-stranded RNA or DNA. To cleave double-stranded RNA or DNA, TIR proteins follow the contours of the strands and wind tightly around them. This structural data explains how the same protein performs two catalytic functions. The ability to form two alternative molecular complexes is a characteristic of immune receptors.

To further clarify the mechanism, the researchers showed that these dual functions of TIR immune receptors are not sufficient to kill infected cells. The small cyclic nucleotides (2′,3′-cAMP/cGMP – cyclic adenosine/guanosine monophosphate) generated by the breakdown of the phosphodiester bonds in RNA and DNA are required for TIR-mediated cell death in plants.

In a close relative of the tobacco plant called Nicotiana benthamiana, the researchers showed disrupting the ability of TIR immune receptors to synthesize 2′,3′-cAMP/cGMP blocks their ability to induce cell death, supporting the important role of these cyclic nucleotides.

Using analytical chemistry assays the scientists showed TIR domains triggered the production of the unconventional 2′,3′-cAMP/cGMP instead of their more common cousins, 3′,5′-cAMP/cGMP.

The authors also showed that like all factors that control cell death, the levels of 2′,3′-cAMP/cGMP are tightly regulated in the cell. They showed that 2′,3′-cAMP/cGMP is depleted not only by plant regulatory factors—such as NUDT7, a negative regulator, or TIR signaling found in a small flowering plant called rockcress—but also by micro-organisms that have developed sly ways of depleting these cyclic nucleotides to disarm plant defenses.