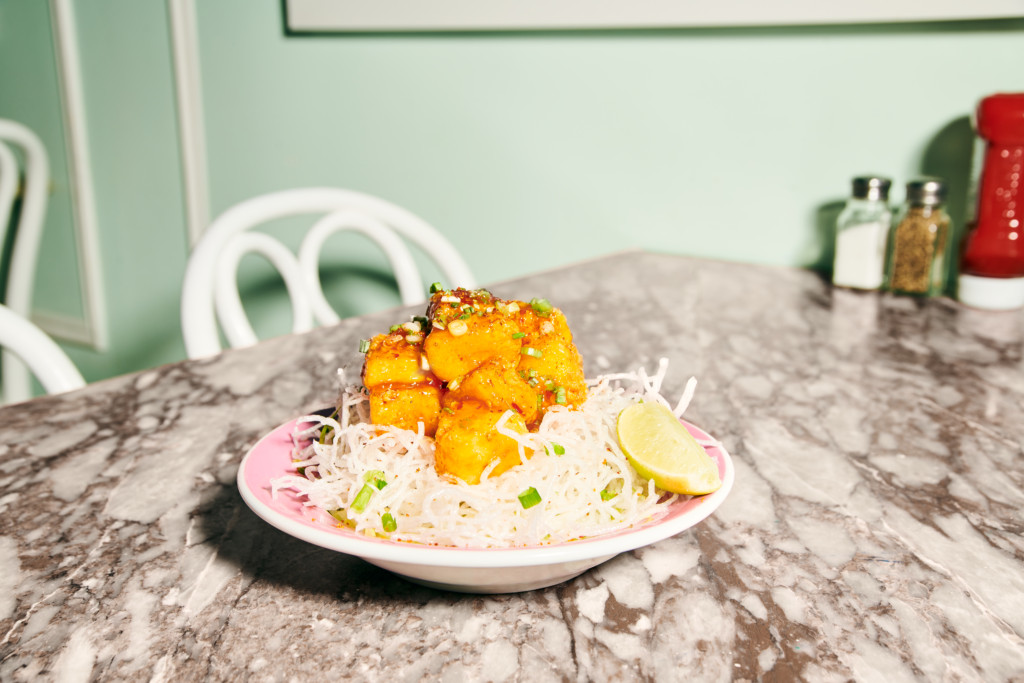 The Vegan Frrrozen Hot Chocolate is part of a newly released vegan menu and is made from a secret mix of cocoa powders, powdered sugar and cream of coconut, blended with ice, and topped with a mountain of coconut milk whipped cream and a sprinkling of toasted coconut flakes ($19.95). Additional new menu items include a Vegan Black Bean Burger, Crispy Vegan Chicken Tacos, Serendipity Vegan Truffle Mac, Crispy Vegan Polynesian Pineapple, and more.

“Our menu has always included plant-based items, so it was only fitting that we developed a vegan version of our Frrrozen Hot Chocolates, the iconic dessert that has satisfied nearly 30 million guests since we opened our doors in 1954,” said said Chef Joe Calderone, Creative Director of Serendipity3. “We’re proud to offer a larger vegan menu to accommodate plant-based eaters in search of a serendipitous dining experience.”

These vegan dishes are now regular featured items on their prominent menu that includes classics, as well as new upgrades, like the Infamous Truffle Burger with Boursin Cheese & Black Truffle Mayo, the It’s My Birthday Cake Sundae, and the Selena Sundae, which was recently unveiled in collaboration with part-owner and investor in Serendipity3 and Serendipity Brands, pop-icon Selena Gomez.

Known for its popular dishes and decadent desserts, Serendipity3 has captivated millions of patrons since its inception, with a celebrity following including Cher, Beyoncé and Jay-Z, Kim Kardashian, and more…

Located at 225 E 60th Street, Serendipity3 is open seven days a week from 11 a.m. until 11 p.m. EST. For more information and to book a reservation, please visit: www.serendipity3.com.

Serendipity3, the legendary New York City restaurant and general store, founded in 1954, as one of the city’s truly unique dining experiences. The home of amazing food and decadent desserts, such as the Frrrozen Hot Chocolate, Serendipity has been captivating millions of patrons since its inception. It’s an enchanting place where artists got their inspiration and actors fulfilled their cravings. Beginning with Marilyn Monroe, Andy Warhol, Grace Kelly and Cary Grant in the 1950’s, continuing with a celebrity following that includes Cher, Candice Bergen, Melanie Griffith and Ron Howard, the restaurant continues to attract celebrities such as Beyoncé, Ryan Reynolds, Selena Gomez and Kim Kardashian. In addition, the restaurant has been the setting of three major Hollywood productions, One Fine Day (1996) with George Clooney and Michelle Pfeiffer, Serendipity (2001) with John Cusack and Kate Beckinsale, and Trust The Man (2005) with Julianne Moore and David Duchovny.