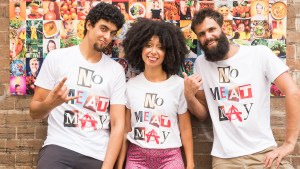 More than a third (34 percent) of this year’s No Meat May participants cited overfishing as a key reason to ditch meat and fish.

No Meat May says this is partly due to the awareness raised in Seaspiracy, which outlines the damage industrial-scale overfishing is causing to the environment and ocean ecosystems.

Ryan Alexander is the initiative’s co-founder. In a statement sent to PBN, he said: “Giving up meat might seem hard but it’s never been easier.

“There are so many brilliant plant-based options out there, particularly in the UK.

“And when you join No Meat May, you get thousands of people from around the world cheering you on and sharing their veggie cooking discoveries.

“It’s a really fun journey and a fulfilling one – for your health, your soul, and your taste buds.”

Disney star Tessa Brooks told her Twitter followers: “I love fish and sushi more than anything.

“But, after watching Seaspiracy last night in good conscious I just can’t eat it anymore.”

“Watching Seaspiracy…” Kourtney said. “I haven’t eaten meat in a few months at all but was still eating a little fish. But after watching this…”

Since the film’s debut, the directors of Seaspiracy have created a petition to save 30 percent of our oceans by 2030. You can sign the petition here.

The post Seaspiracy Encourages Thousands To Ditch Animal Products As ‘No Meat May’ Attracts 65,000 Sign-Ups appeared first on Plant Based News.