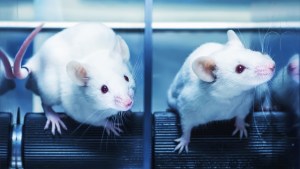 Gene editing is being used by scientists to create biologically specific female and male-only litters of mice. This is reportedly to stop the deaths of thousands of animals during testing experiments.

It’s also hoped the process can stop thousands of male chicks from being brutally killed in the egg industry.

Additionally, it comes at a time where the UK is considering regulating gene-edited crops – but many remain conflicted about the ethics.

Now, scientists can program cells to produce either female-only or male-only chromosomes inside embryos, the BBC reports.

Many experiments involving mice call for specifications of the sort, and one scientist revealed total “mouse usage” is in the hundreds of thousands.

He said: “Between four and six billion chicks in the poultry industry are killed each year worldwide.

“In principle, we could set up a system so that instead of having chicks having to be killed after birth when they have a nervous system and potentially capable of suffering, those eggs are laid but simply never hatch.”

Other experts state the process could be transferred to livestock farming. But other organizations, Compassion In World Farming including, warn it could continue the chain of factory farming.

The RSPCA’s Barney Reed claims it must be regulated “robustly,” the BBC adds.

“Any potential use in agriculture, there would need to be extensive public conversation and debate, as well as changes to legislation,” Dr. Ellis echoes.

However, there are already debates among world leaders on the topic, with the Roslin Institute considering pilot studies on rolling out the practice to animal agriculture, according to reports.

The post Scientists Are Gene-Editing Mice To ‘Save Thousands’ In Experiments appeared first on Plant Based News.