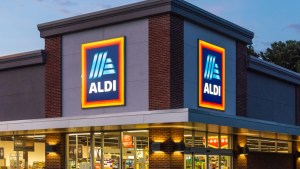 Vegan food sales skyrocketed at Aldi UK last month, boosting by 500 percent compared to the January prior. The discount supermarket chain credited the rising popularity of Veganuary for this growing interest in plant-based food.

The budget-friendly chain expects the impressive sales figures to stick around for the remainder of the year, owing to Aldi’s recent expansion of its vegan and vegetarian range.

The supermarket extended its plant-based lineup by 50 percent, spurred on by growing demand.

“Veganuary is getting bigger and bigger each year as the UK’s appetite and interest in plant-based food grows,” Julie Ashfield, Aldi managing director of buying, said in a statement.

“In response to that demand we’re continuing to expand our vegan offering, giving our shoppers plenty of choice and all at great value.”

In celebration of Veganuary 2022 – which proved to be the largest yet – Aldi came out with its “largest vegan range yet.”

And consumer interest didn’t end as January came to a close. “It’s also a trend that we’re witnessing year-round and, as more and more people adopt this diet,” Aldi’s Ashfield continued. “We expect these products to remain popular throughout the year.”

The company said that sales of its plant-based Wicked Kitchen products “rocketed” – with demand doubling in January compared to last year.

The post Sales Of Vegan Food Catapulted By 500% At Aldi UK This Veganuary appeared first on Plant Based News.