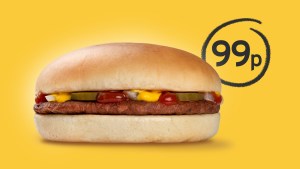 The Veganuary campaign has been wildly successful over the past seven years, encouraging hundreds of thousands of people worldwide to follow a vegan lifestyle throughout January.

The popularity of the annual challenge has grown enormously, and Veganuary supported over half a million people in trying to go vegan during the 2021 campaign. As participation has more than doubled every year, food businesses now capitalize on January as the perfect moment to bring out new plant-based products.

With Veganuary 2022 approaching, UK startup Ready Burger is set to make a splash by taking on the fast-food giants and launching a world-first product—a timeless classic plant-based burger for only 99p.

Since Veganuary first started in 2014, the plant-based fast food scene has changed beyond recognition due to soaring consumer demand. As a result, many of the big players in the food sector have started to tap into the booming market for vegan options.

As one in 20 Britons tried being vegan during Veganuary 2021, businesses launched over 825 new products and menu options.

2021 was also a breakthrough year for mainstream vegan burger alternatives, with new options from the most prominent players in the market. In April, Burger King launched its plant-based Whopper, and McDonald’s brought out the McPlant in September.

Yet, with these burgers priced at £4.79 and £3.49 respectively, ample room remains for a new burger maker to deliver a lower-priced option that could encourage even more consumers to try vegan.

Already dubbed the “Vegan McDonald’s” by its fans, Ready Burger is poised to take up this challenge by launching the world’s first 99p plant burger during Veganuary 2022.

Affordable with no compromise on flavor

The founders of Ready Burger built the business on the belief that fast food should taste great, be inclusive, inexpensive, and more sustainable than the animal-based alternative.

The business is the brainchild of Adam Clark and Max Miller, who set out to bring a value-and-plant-based fast-food option to the UK high street. Their mission from the beginning has been to deliver an affordable, fully-inclusive vegan and halal menu for the masses.

Clark and Miller launched the first Ready Burger in London’s Crouch End in May 2021. Decorated in eye-catching yellow and black with the ubiquitous “hamburger” web design element repurposed as its logo, the second site on Finchley Road followed in October 2021.

Conceived to bring plant-based fast food to everyone, the entire Ready Burger menu offers low everyday prices, something to which the founders remain entirely committed.

Planning to drive prices down further with the 99p Ready Burger, the founders are looking forward to supporting what Veganuary expects to be their biggest campaign to date.

“Price has been the biggest barrier to plant-based eating until now,” says Miller. “We wanted to offer the world’s first 99p plant burger in Veganuary 2022 to make it even more accessible for everyone to try a vegan diet.”

From January 2022, the now-99p burger will sit alongside an expansive vegan menu that includes the Big Ready, Chicken Challenger, Bacon Cheeseburger, Crispy Filets, and a range of fries, drinks, sides, and homemade sauces.

Ready Burger uses high-quality plant proteins in its unique versions of the world’s favorite fast food. In addition, the team strives to make all of their products to the highest standards with a focus on sustainability.

Miller and Clark are obsessed with ensuring their burgers live up to the expectations of their customers. While both co-founders live primarily plant-based lifestyles, they do taste-test the burgers of their rivals to tailor their products and ensure everything matches as closely as possible what meat-eaters, in particular, have come to expect.

Clark, former owner of a vegan restaurant in Sheffield, says, “Ready Burger is 100 percent plant-based, so there is no cross-contamination in the kitchen, and customers can be confident the company shares their values. A plant burger emits 92 percent fewer greenhouse gas emissions, needs 93 percent less land and 70 percent less water than a beef burger.”

Earlier this year, the founders celebrated as their crowdfunder exceeded its target in hours, raising 2 million GBP through 842 investors. As the business took off, Ready Burger launched delivery services via Just Eat, Deliveroo, and UberEats.

With the Crouch End and Finchley Road branches now well-established,  Miller and Clark say their third and fourth sites will be open in early 2022, with several future locations already in the planning stages.

Ready Burger is also in the early stages of planning a franchise strategy, enabling operators to run their own business under the brand, and new menu items are under development.

For Miller, the crowdfunding success, new locations, and launch of the seemingly unbeatably cheap 99p burger this Veganuary are just the beginning.

“We’ll be bringing more world firsts with exciting new menu items in 2022, all at the same prices people have come to know us for, and we have advanced expansion plans with new stores,” says Miller.

“We won’t be stopping here!”

* This is a paid-for advertorial.