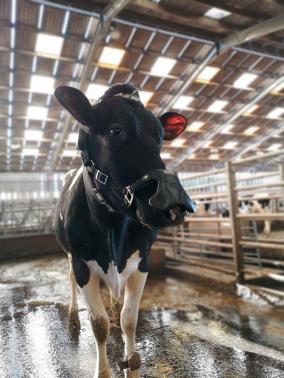 A couple of weeks ago, Prince Charles was photographed admiring a model of a cow adorned in a black mask that looked a bit like something out of a dystopian horror film.

The device, which was designed by UK company ZELP, neutralizes methane by catching a cow’s burp and oxidizing it, meaning it’s released into the atmosphere as CO2 and water vapor.

It was named as one of the winners of a £50,000 prize in the The Prince of Wales’ inaugural Terra Carta Design Lab, a competition that recognises “innovative design solutions to the climate crisis.”

The design may be innovative, but the fact that these contraptions are being validated and celebrated as a viable solution to the climate crisis by the press, the public, and one of the most recognizable royal figures in the world is hugely concerning.

The idea that animal agriculture-related emissions can be combated by some quick-fix media-friendly contraption, rather than by a drastic overhaul of our food system, belittles the urgency of the incoming climate catastrophe. The masks are papering over the cracks of the crisis and failing to address the root cause of the problem – that we eat far too much meat.

Animal agriculture is one of the leading causes of global warming, and is generally understood to be responsible for at least 14.5 percent of the world’s emissions (though one recent study put it as high as 87 percent).

Of all the animals we eat, cows are by far the biggest contributors, due largely to the fact that they emit methane when they burp, fart, and defecate.

Methane, along with carbon dioxide and nitrous oxide, is one of the main greenhouse gases responsible for global warming. It is 80 times more warming than CO2 in its first 20 years in the atmosphere.

A UN report released in August 2021 stated that countries need to make “strong, rapid, and sustained reductions” in methane emissions. Methane has a short half-life, meaning we would see the benefits very soon after reducing the gas.

Cutting these emissions, therefore, is the most effective thing we can do to quickly reduce global warming.

Around a third of the world’s methane comes from cattle, and the only way to sufficiently reduce these emissions is to dramatically cut the number of cows we farm for meat and dairy. Last year, the UN endorsed a report urging world leaders to shift away from animal agriculture and move towards plant-based food systems. Meanwhile, a 2018 study from the University of Oxford found that a 90 percent fall in beef consumption in western countries was “essential” to avoid climate breakdown.

But while senior royal figures and the general public are celebrating cow face masks, the beef and dairy industries are growing, and the planet is getting hotter. Worldwide, people consumed 70.9 million metric tons of beef in 2020, up from 65 million in 2010. Despite making a joint pledge to reduce methane emissions by almost a third in the next decade, neither the US or EU have made any commitments for the farming sectors.

An IPCC report published in April of this year proclaimed that limiting global heating is a “now or never” issue, so the idea that we have time to flitter about putting masks on a few cows, rather than creating urgent revolutionary new laws to reduce their numbers, is hugely problematic. While the masks do apparently remove around 53 percent of cows’ methane emissions, they fail to address emissions in their flatulence and manure. It would also be pretty unfeasible to distribute them widely enough and persuade a notable proportion of farmers to use them.

But even if the masks did successfully neutralize all methane from cows, and they were somehow given to every single one in the world, they would still fail to address the other environmental crises caused by these animals.

Animal agriculture is one of the leading causes of deforestation, which is one of the most critical environmental issues we are currently faced with. Cattle ranching accounts for around 80 percent of deforestation in the Amazon, and beef production uses around half of agricultural land in the US. As well as the farms themselves, a huge amount of deforested land is used to grow soy and other feed for these animals.

Deforestation is responsible for a huge amount of carbon build-up in the atmosphere, which directly contributes to global warming. When trees are cut down to create farmland, the CO2 they were storing is released, and the reduction in the numbers of trees means that less of the gas is removed from the atmosphere. Methane, therefore, isn’t the only greenhouse gas cow farming creates.

Animal welfare in the farming sector

But putting aside the environmental shortcomings of these masks, the idea that they are some sort of stroke of genius – when they likely inflict more misery on beings that already have a life more painful than it’s possible to imagine – shows how far removed we are from animal suffering. The designers claim that these masks fit “comfortably” and don’t impact their daily lives, but given that cows are sentient beings capable of distress and discomfort just like we are, this is doubtful.

Clearly, it isn’t enough that we forcibly impregnate them, drag away their calves hours after they’re born, hook them up to milking machines, then pack them off to the slaughterhouse where they’re strung up and have their throats cut (often while they’re alive and kicking). Now, humans have decided to force them to spend their lives with a massive piece of plastic attached to their face, all so we can carry on burying our heads in the sand about the fact that what we’re doing to them is killing the planet.

These masks are just the latest bit of evidence that humans will do seemingly anything to avoid facing up to the fact that we need to urgently stop eating animals to avoid climate catastrophe.

While there is no doubt that they will work to reduce methane in the cows wearing them, they will likely make up a drop in the ocean in a world where meat demand is growing and cow farming continues to expand unchecked. We need urgent intervention from governments to dramatically reduce our meat intake and move us to a plant-based food system.

The post Putting Face Masks On Cows Isn’t A Solution To The Climate Crisis – Not Eating Them Is  appeared first on Plant Based News.