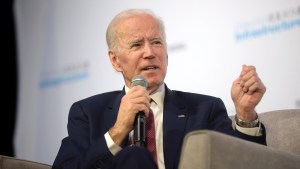 A newly published statement from the Biden-Harris Administration reveals that the US is setting aside $1 billion for the country’s meat industry. It’s part of the government’s efforts to shake up the sector and give more market control to independent meat producers. And in turn, the administration hopes, lower the prices of animal protein for consumers.

A handful of mammoth companies are currently in control of various US meat markets. Four meatpacking companies control 85 percent of the beef market, the release reveals.

“When dominant middlemen control so much of the supply chain, they can increase their own profits at the expense of both farmers—who make less—and consumers—who pay more,” the Biden-Harris Administration statement says.

Fifty years ago, hog farmers received 40 to 60 cents on each dollar spent on pork. Now, they are given 19 cents.

Along the same vein, ranchers got more than 60 cents per dollar five decades ago, and now bag around 39 cents.

And prices are rising for families too. Meat is now the largest contributor to the increasing cost of groceries in the US.

In an effort to combat the “urgent” issue, the Biden-Harris Administration is putting forward $1 billion in American Rescue Plan funds.

The funding includes hundreds of millions of dollars in grants.

But not everyone will be optimistic about the plan. Didier Toubia is the CEO and co-founder of cultured meat start-up Aleph Farms. He maintains that the food system should be evolving away from conventional meat, which has become “controversial” due to its impact on the planet and its links to animal exploitation.

He also commented: “More than breaking up monopolies, real change in our food system will be achieved as we incorporate a wider variety of healthy, sustainable food choices, especially those that use less of our limited natural resources.

Cultured meat, a product of cellular agriculture, can be created without slaughtering animals. Further, the technology requires far fewer resources.

Toubier says cell-based meat can lower greenhouse gas emissions by 92 percent, land use by 95 percent, and water use by 78 percent.

Other opponents of animal agriculture argue that animal protein should be scrapped altogether, with vegan and vegetarian food taking center stage.

Ipsos Retail Performance – a leading retail analytics firm – found that veganism is now a “mainstream part of the American diet.”

The company discovered that the number of Americans who consider themselves vegan has skyrocketed by more than 3,000 percent over the past 15 years. In 2004, just 290,000 people were adhering to a plant-based diet. Now, that figure has jumped to roughly 9.7 million people.

And more people are becoming curious about the trend. A survey conducted by YouGov at the end of last year found that nearly a third (31 percent) of Americans are interested in adopting a fully plant-based diet.

A separate survey found that 49 percent of Americans are open to swapping out animal products in favor of plant-based alternatives.

The figures are higher among some demographic groups. Out of the Asian American participants, 71 percent said they “strongly” or “somewhat agree” that they’re willing to make such changes.

The post President Biden Allocates $1 Billion To Help The Struggling US Meat Industry appeared first on Plant Based News.