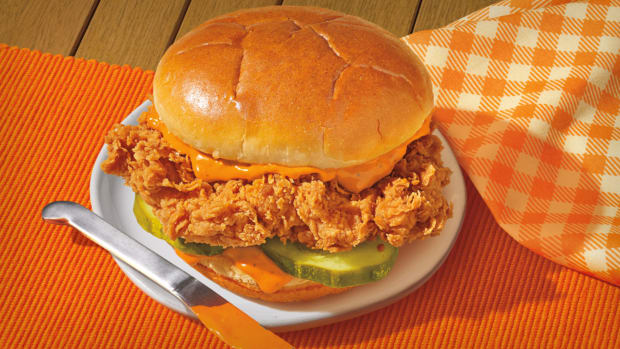 While fast-food chains like to talk about expansion plans and digital subscriptions, the questions that many of their customers want answered are: "How is that made?" and "What's coming to the menu next?"

Certain fans meticulously track any changes to their favorite chains' menus. But the process of going from idea to menu item often remains shrouded because competition is sharp and restaurants don't want to give rivals an advantage.

Another point of research, the executive says: "The folks who may not come to us as often: What do they want?"

TheStreet: Please walk us through the process of bringing new items to Popeyes. How does something new appear on the menu?

It takes a long time. Something like the chicken sandwich took multiple years to go from ideation to actually being in our restaurants. We typically start with an understanding that anything we do needs to accomplish two things: have our unique and unparalleled quality and be authentic to the Popeyes brand.

So we do a bunch of research to understand who our guests are, what they want and even who our guests are not. The folks who may not come to us as often, what do they want? Once we're armed with that research, we have a team of about 10 chefs led by Amy Alarcon, [vice president of culinary innovation], who we call the Mother of the Chicken Sandwich. They're in the kitchen every day and experiment with the best ways to use some of that research.

Once they come up with things, it goes to sensory testing and eventually market testing and operational testing to see what kind of impact it will have on our franchisees and profitability. After that, it eventually goes to market. but that could be anywhere from a one- to three-year process.

A big trend in the industry is plant-based protein. Have you considered expanding in this direction?

We actually have a red-bean burger in the United Kingdom. I don't know if you've ever had our red beans and rice, but we took it and made it into a burger.

Going back to that original point of authenticity, what's more authentic than taking a really popular side item and making it into a plant-based? [The bean burger] was built for that particular market, but if you think about the U.S. as a market, we're potentially looking at a lot of products.

It's still early on and, at least in my view, anything that we choose to do is not going to be a fad. It's going to be something that we would want to do and ideally keep on the menu for the long run.

Is there a litmus test for what fits the Popeyes brand? How do you decide what's on or off brand?

The chain previously announced that it is exploring "tech solutions" to the ways its kitchens and restaurants are run. Is automation something you're heading toward?

People often hear automation and think of robots making their food. I've seen some of that happen in the industry, but that's not really the reality of what we're doing.

Our goal is about incremental innovation to make team-level team members' life easier. With the staffing crunch over the last few years, we've had to take a hard look at what the most difficult parts of the job are and the pain points that our team members have.

The solution doesn't have to be as sexy as robots.

A good example is how historically a team member would manually fish out the chicken after 12 minutes had passed and it was done cooking.

Something as simple as an auto-lift fryer, which has a tray that can lift up the chicken automatically may not be super innovative and, you could argue, could have been done a long time ago. But it is something that we're putting in our restaurants now because our team members want it and said that it would make their life easier and safer for them.

Simple things like that can go a long way in our system.

Speaking of staffing crunches, how do you recruit and retain staff amid a nationwide labor shortage? The pandemic made many reconsider working in this industry altogether.

We have about 3,000 restaurants in North America and we are 99% franchise. So our team members are actually employed by our franchisees, and over the last couple of years, we've seen the labor crunch.

People often talk about competitive wages and benefits when it comes to hiring which, of course, are critical to getting folks in the door. But we also have to focus on things like training, rewards and recognition, opportunities for advancement and building a culture of engagement.

We know that if someone is starting in our restaurants, not putting them on the line and actually training them in the first two days [will lead to a] two to three times higher retention rate later.

Training is a big area that we've invested in to ensure that all of our team members are trained in those first two days or that when a new product is coming out they feel really comfortable [making it] before guests ask them for that product.

A lot of fast-food chains are falling over themselves to get people to order from their apps. Tell us about Popeyes' efforts in this area.

It's been an interesting journey for us. If you compare prepandemic to where we are today, our digital sales were virtually zero prepandemic. People always say that the pandemic accelerated a lot of trends that were already happening. When lockdowns were put in place, delivery really shifted our business.

Many of our guests realized that you can't eat pizza every night. Pizza has historically been the most commonly delivered item, but after that, fried chicken also ranks pretty high up there.

We tapped into that insight and made our chicken available through our own app through all the aggregators. That helped us go from 0% digital sales to almost 20% of our sales coming from digital just three years later.

Your 2022 plans include opening new stores in China, Spain, Brazil and the United Kingdom as well as launching in France, India and Romania for the first time. Tell us about Popeyes' international presence.

Before this role, I led the Popeyes business in Asia out of Singapore, and it's been an awesome experience to actually see how well received [the company] is all around the world.

We'd launched in the UK, Switzerland and Brazil a few years ago. What we see every time we enter these new markets is that we're met with great fanfare. This distinct Cajun profile is something people from other places really want to try.

We want to say that Popeyes transcends borders, but at the same time, the ability to tailor and localize the product has also been critical to global success.

If you go to Vietnam, you are going to see spicier flavor profiles than what you'll find in the U.S. We actually call it "Asia Spicy" because it's slightly spicier.

If you go to China and try our chicken sandwich in China, it's not white meat. It's actually dark meat with the skin on it. It's a different protein: equally delicious but tailored to the market.