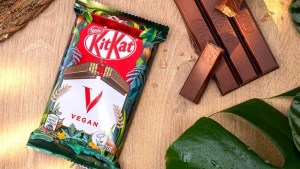 The CEO of Nestlé, Mark Schneider, has spoken about the major commercial opportunity presented by the plant-based food market.

Nestlé is the largest food and beverage company in the world, and also the world’s largest producer of dairy products.

Yet increasingly, the multinational corporation has had its sights set on plant-based dairy and meat products.

Earlier this year, the company debuted a vegan version of its popular KitKat chocolate. And just last week, Nestlé launched plant-based egg and shrimp under its Garden Gourmet brand.

The lure of plant-based food

The shift towards animal-free food has been motivated, in part, by Nestlé’s aims to cut its greenhouse gas emissions.

Meat and dairy production is linked to high outputs of carbon dioxide as well as methane, which has a 28-34 times higher global warming potential than CO2.

Animal farming is also to blame for significant deforestation, air and water pollution, and biodiversity loss.

But it’s not just environmental reasons nudging Nestlé away from animal products. The company recognizes financial potential, too.

“We think less meat and dairy is good for the planet, but it’s also good for diet and health, and it is also a big commercial opportunity,” Schneider told the BBC.

A report published earlier this year explored the market potential of plant-based foods.

It found that in 2020, the vegan food market in the US grew nearly twice as fast as the nation’s total retail food market – boosting 27 percent and 15 percent respectively.

In August, a separate report, produced by Bloomberg Intelligence, estimated that the vegan food market will exceed $162 billion within the next decade. If it does, this would represent a growth of 451 percent.

And although plant-based alternatives can be more costly for consumers, this is a short-term obstacle, Schneider notes.

“The first unit is always going to be a little more expensive, this is a hump you have to get over, and then at some point economies of scale kick in making them more affordable as we have seen in electric cars,” the CEO explained.

“Some consumers are willing to pay a premium now for products that pave the way for that.”

Last week, Schneider revealed that Nestlé plans to launch a plant-based protein to ‘replace every animal protein out there’.

Nestlé has come under fire in the past due to accusations that the company uses unethical supply chains and practices, including child labor.

To learn more about the controversy, see here.