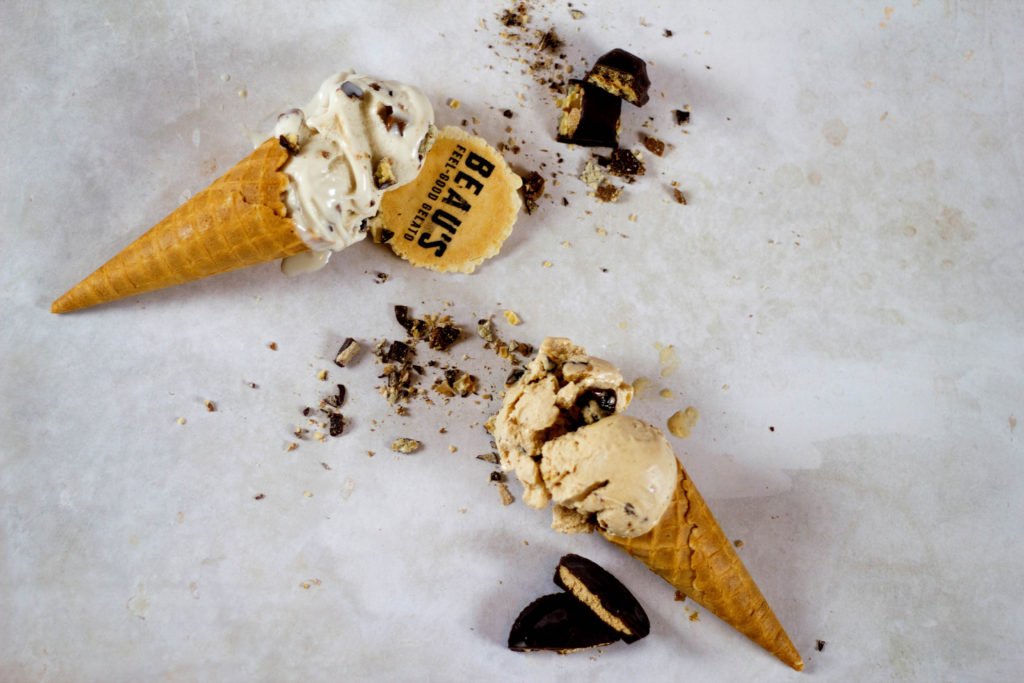 Both flavours come in 450ml recyclable tubs, accompanied with vegan cones, wafers, and toppings in the box. All boxes arrive frozen using carbon-neutral delivery and can remain so for up to twelve house after delivery before needing to be placed in the freezer.

“Veganuary is such a brilliant initiative to support people considering transitioning to veganism, or just trying it for the first time, so we wanted to create something that would be both familiar and a bit special, to encourage people looking at switching to vegan options,” explains Amber Fox-Eyre, co-founder at Beau’s Gelato. “The LoveRaw team has been brilliant to work alongside and the perfect partner for our first-ever flavour collaboration.”

“With one third of people in the UK already consuming plant-based milk as a preference*, choosing plant-based for other traditionally dairy products – such as cheese, chocolate, and ice cream – can be a relatively simple switch,” adds Joseph Eyre, co-founder at Beau’s. “We want to highlight that there are now an abundance of delicious alternatives out there that people can try: plant-based is no longer synonymous with inferior quality.”

Located in the North-East of England, Beau’s is dedicated to proving that plant-based ice cream tastes even better than dairy-based alternatives, with a diverse line-up of authentic Italian-style vegan gelato made using natural ingredients.

All of Beau’s gelato is made in-house – with no artificial additives or prefabricated mixes – and, as such, are free from 12 of the 14 commonly-recognised allergens. Using an industry high concentration of core ingredient (up to 40% of the overall ingredient mix), each of Beau’s ice creams are rich, creamy and bursting with flavour. To date, Beau’s has received seven Great Taste Awards – for its Raspberry, Pistachio, Strawberry, Chocolate Chip, Praline, Raspberry Ripple and Coffee flavours – while competing in the same category as mainstream dairy ice cream brands. Beau’s Raspberry was also recently named a Finalist for the World Plant Based Taste Awards.