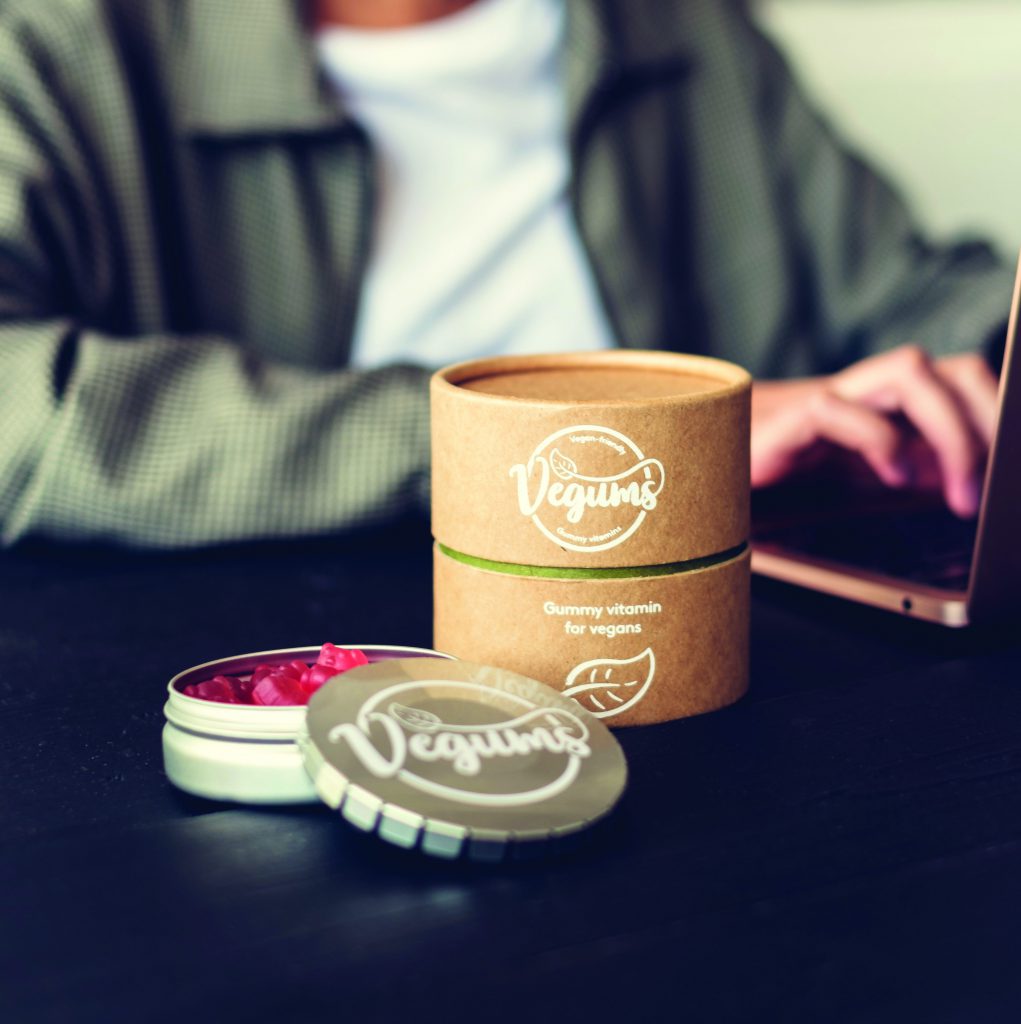 The month of Veganuary is amongst us and the plant-curious communities are up for the challenge to embrace a new lifestyle motivated by their concerns for the planet, animals, or their personal health. However, after a Veganuary challenge left pharmaceutical professionals John Rushton and Abdul Sharief feeling drained and lacking energy, they soon recognized that they were missing out on vital vitamins in their diet. “It was probably because we opted for convenience food rather than whole, nutrient-rich plant foods,” the duo recalls.

John and Abdul were left disillusioned by their search for a supplement that was suitable for vegans and checked the boxes for convenience and taste. They were not going to settle for the large, bland, chalky tablets that were advertised as “suitable for vegans,” but contained some vitamins that weren’t necessary while lacking on ones that were crucial for those on a plant-based diet. Soon after, they decided to use their pharmaceutical expertise to formulate their own vitamins that are optimized for vegans with everything they need and nothing they don’t. The duo founded the UK-based vegan multivitamin gummy company—Vegums, to nourish the growing plant-forward crowd in light of the burgeoning awareness of the horrors of the meat and dairy industry. Their decision to create bear-shaped gummies added the element of fun for all ages and hassle-free consumption!

Vegums’ commitment is not limited to their customers alone, but also extends to the environment and animals. Having dispensed from endless plastic bottles over the years as pharmacists, they were determined to do whatever it took to prevent any more plastic from entering landfills and the ocean. They stripped back the packaging to make it biodegradable and completely plastic-free—something no other multivitamin company was doing at the time.

Co-founder John sat down with VEGWORLD to offer the inspiring scoop on Vegums and celebrate their launch across the Atlantic!

VW: Was there a specific void in the existing market that you were trying to fill with this product?

JR: When Abdul and I began to explore existing vegan vitamin supplements, we felt that the existing options were lacking in ease of consumption and delicious taste. It was a great opportunity for us to deliver a tasty, healthy, plant-powered boost for everyday “on-the-go” folk like us. We created Vegums as fun, easy to chew, supplements that you can carry around in a portable, reusable tin. They’re flavored with real ingredients like berries and oranges so even the fussy eater can enjoy our products. It took us two years to perfect the Fish-Free Omega-3 because we wanted to create the most delicious vegan Omega-3 vitamin gummy on the market without the “fishy” flavor that can be off-putting to some. I believe we succeeded on that front!

VW: When starting Vegums, did you have a target customer in mind?

JR: Not particularly. We wanted to ensure that anyone following a plant-rich diet is getting the right daily nutrition. This spans from a young “picky eater” child to the health-conscious adult and all demographics in between! We’ve found that our customers support businesses and companies that align with their values— be it sustainability, animal rights, or food justice. It humbles us to know that our cherished customers trust our mission and resonate with our values.

VW: What are some common myths you encountered when it came to vegan nutrition that you hope to dismantle with your products?

JR: The most common misconception is that vegans have to supplement because they don’t get the essential nutrients in their diet. This isn’t true and it is entirely possible to get all the nutrients you need from a plant-based diet. One just has to be cognizant of what they are eating and educate themselves about the sources of various nutrients. However, for most busy people this can be an inconvenience or an added stressor.

Vegums supplements provide a “nutritional safety net” to give vegans or those on a plant-based diet the confidence that they are getting all the essential vitamins and minerals they need every day to thrive!

VW: Do you observe any frequent mistakes that people make when taking plant-based supplements?

JR: The biggest mistake one can make is to start supplementing only when one begins to feel deficient. For example, Vitamin B12 can take months to deplete the body’s stores and once this happens it can be much more difficult to recuperate. Prevention is far superior to cure in our books and we’d rather our customers prevent deficiencies in the first place. Sometimes there can be a tendency to overdo taking a certain supplement to avoid deficiencies. However, in the case of water-soluble nutrients, the body will automatically get rid of any excess vitamins and minerals. So, increasing the dosage doesn’t confer any additional benefits. This is why Vegums’ formulations are perfectly designed to deliver the optimum dosage of every essential nutrient.

VW: Your mission also encompasses being mindful of your environmental impact. How does maintaining a sustainable, zero-waste packaging model work for your subscription model such that it’s easy for customers?

JR: In a customer’s first order through our website, they receive a starter-pack with a 1-month supply of Vegums wrapped in biodegradable cellulose, and a reusable metal tin to carry your Vegums around. All this is contained in our signature Vegums cardboard tube, which customers may upcycle into a variety of useful things—from a stationary holder to a plant pot. They will also get a free organic cotton tote bag.

On subsequent orders, customers can reduce their carbon footprint and opt-out of the tin, cardboard tube, and tote, and receive only the gummies in their biodegradable cellulose packs.

VW: Tell us about Vegums’ philanthropy and organizations that you are supporting with your business.

JR: We are honored to have supported Vitamin Angels for quite some time now. Vitamin Angels is a fantastic organization seeking to eliminate malnutrition in children and helps at-risk populations—specifically pregnant women, new mothers, and young children—gain access to life-changing vitamins and minerals. Every month, we support their noble mission by donating a portion of all sales. Also, with every customer review for Vegums on Trustpilot, we will plant a tree through our partnership with MoreTrees and reinforce our commitment to the planet and customers!

VW: We love when mission-driven businesses and organizations support one another. On that note, what do you envision a healthy, plant-based world looking like?

JR: A plant-powered world is a just world for all. Firstly, we as a society will treasure our pristine planet and live in harmony with all life forms. There would be a lower incidence of chronic illnesses such as cardiovascular disease and cancer. By eliminating the suffering of billions of land animals who are being factory farmed, we can restore those lands to grow nourishing crops to feed those in need and tackle world hunger. We will rewild areas with dwindling biodiversity, and revive the beauty of nature we have taken for granted.

VW: Great optimistic vision for our future! Speaking of the future, do you have any exciting plans you’d like to share with us?

JR: We are always working on new exciting things! While I can’t divulge much at the moment, I can guarantee that our upcoming new range of products that are in development will take an entire sector of the market by storm! Watch our space and stay tuned for the big reveal!

Vegan Multivitamin: Specifically optimized for the vegan diet. It contains vitamins B12, B6, and D3 plus folic acid, selenium, and iodine on the premise of everything you need and nothing you don’t. The gummies come in a tasty strawberry flavor and get their vibrant red color from natural black carrot extract.

Fish-Free Omega-3: Fully vegan Omega-3 from sustainably sourced marine algae, provides a huge 80mg DHA per daily dose. Omega-3 is considered to help build and maintain healthy eyes, skin, heart, and brain. It is especially important during childhood development. Vegums have the natural sweetness of oranges and are absent of the fishy taste.

Iron: A daily dose of two naturally flavored blackberry gummy bears results in an amazing 14mg of easier-to-absorb ferrous iron. A good iron level is essential to prevent anemia, which manifests as tiredness and a lack of energy.

Vegums are available for purchase directly from their website, and via Amazon, in addition to a growing number of selected local vitamin and health and wellness stores across the country. With a subscription, a one-month adult supply of the Vegan Multivitamins and the Iron retail for $19.95; with Fish-Free Omega-3 retailing for $21.95.

Vegums was founded in 2018 by two UK pharmacists, John Rushton and Abdul Sharief, to address the vitamin and mineral deficiencies associated with rapidly growing vegan and plant-based lifestyles. Certified by the Vegan Society and winners of the 2020 World Plant-Bases Awards, Vegums has formulated the perfect blend of vitamins and minerals specifically to complement a plant-based diet. Upon entering the US market in the fall of 2021, Vegums offers a range of vitamin gummies including a Vegan Multivitamin specifically optimized for the vegan diet; Fish-Free Omega-3, a vegan Omega-3 from sustainably sourced marine algae, and Iron, 14mg of ferrous iron. All Vegums products subscribe to the core vegan spirit and avoid animal-based ingredients such as gelatin or sugar refined with bonemeal. Ingredients such as citrus peel are used as a gelling agent as opposed to animal-based gelatin and natural colors and flavors are used together with a pinch of natural, unrefined cane sugar for sweetness. Advocates of a better planet, Vegums only use biodegradable and/or recyclable packaging.