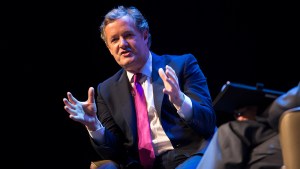 The fast-food giant is under pressure to ditch animal products and commit to a 100 percent vegan menu by 2025.

Last week, distribution centers supplying McDonald’s shut down in the UK following a series of demonstrations by Animal Rebellion campaigners.

This resulted in menu shortages being reported across the country – and the alleged arrest of 14 protestors.

However, this isn’t the first time Morgan has hit out at vegans.

Last year, the former Good Morning Britain host slammed McDonald’s after it announced the trial of its McPlant range.

Morgan branded the line ‘total nonsense’ and said the McPlant burger should be called someone else.

“Look it up in the dictionary, a burger is a meat product, so is a sausage. Why do vegans want to use our language?”

His then co-host Susanna Reid replied: “A veggie burger is a burger. It’s a burger… just because it doesn’t meat in it…it’s a burger.”