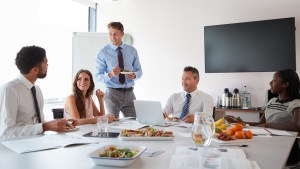 A British Green party councilor has ruffled feathers for calling for all meetings to provide solely plant-based food. He also urged for more plant-based options to be served in schools across Oxford.

And, to educate more young people about the ethical, environmental, and health implications of their food choices.

This was to the dismay of a Conservative colleague who branded the plans “unacceptable.”

Bartholomew said: “Veganism should not be forced down people’s throats. It should be a matter of choice and education.”

This was in response to a motion to fellow councilors put forward by Middleton, who stated: “Meat and dairy production is a significant contributor to greenhouse gas emissions and global deforestation,” the Oxford Mail reports.

Reducing consumption of meat and dairy is a “key part” of tackling climate breakdown, he stressed, in hopes the council would echo those views.

This is especially important for children, the motion continues: “Only 18 percent of children consume the recommended five portions of fruit and vegetables per day. And, most young people’s diets lack fiber.

“Providing appealing plant-based school meals along with education on healthy, climate-positive food choices are excellent ways to address these problems.”

In a statement, a spokesperson said: “We were surprised to see a motion which suggested Oxfordshire’s meat and dairy production was leading to deforestation.

“Oxfordshire’s farmers are proud of the contribution they are making to producing climate-friendly food. British red meat and dairy is produced to some of the highest welfare and environmentally sustainable standards in the world.”

The plan is set to be discussed further at a future council meeting, according to the Oxford Mail.

The post Oxford Council Split Over Vegan Plans: ‘It Should Be Matter Of Choice’ appeared first on Plant Based News.