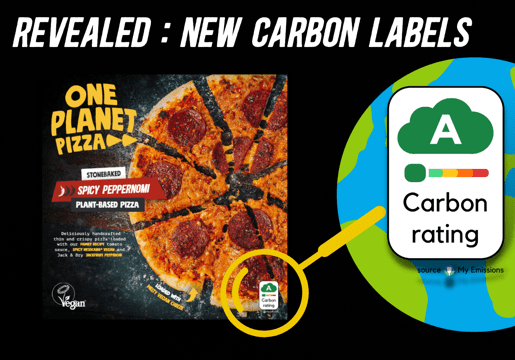 One Planet Pizza has become the first frozen pizza company in the UK to calculate the carbon footprint of its products and publish ratings on the packaging.

The calculations were carried out by an independent organisation, My Emissions, which compared One Planet’s pizzas to equivalent products topped with meat and dairy. The most impressive figures were for the Peppernomi pizza, which generates 54% fewer emissions than a conventional pepperoni pizza.

The remaining three pizzas in One Planet’s core range — Mediterranean Vegetables, Hawaiian, and Three Cheeze Margherita — averaged a 47% lower carbon footprint than pizzas made with animal ingredients. Three out of the four pizzas achieved an A rating, the category with the lowest emissions.

Carbon labelling in the UK

In 2020, alt-meat company Quorn became the first major brand in the UK to introduce carbon labelling on its products. It was followed later that year by Upfield, which added carbon ratings to its plant-based spreads and butters. Research at the time showed that consumers were more likely to buy products marked as having a low carbon footprint.

But after a hugely successful year in 2021, One Planet Pizza won’t be stopping at carbon labelling — the company is now aiming for net-zero emissions.

“As a company committed to helping people make climate-friendly food choices, this is hugely exciting for us,” said co-founder Joe Hill. “Adding carbon labelling is the only way to give consumers the transparency they need to make easy earth-loving choices. We are so proud to be the first frozen pizza company to take this step and with three A ratings achieved, we can now identify what we should focus on to achieve our Carbon Neutral goal.”