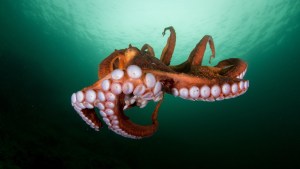 Full disclosure, I haven’t watched the Oscar-winning documentary My Octopus Teacher. But years ago, I used to do a lot of diving myself. During my time submerged in the big blue, I loved finding octopuses. And I understand what attracted filmmaker Chris Foster to these unusual creatures.

They were generally quite difficult to spot. This is because when there’s a perceived threat – like a bunch of humans in scuba gear – they rapidly mimic their surroundings by changing color. Like magic, they’d disappear.

This action is just one of many complex behaviors observed in octopi. Researchers use it to provide evidence of sentience – which is not just the capacity to feel pain, but also pleasure, hunger, thirst, warmth, joy, comfort, and excitement.

Despite this, humans are making woeful waves in intensively farming the creatures. Here’s why it’s such a terrifying prospect…

In fact, a recent assessment of such evidence by the London School of Economics reviewed over 300 publications of scientific research and concluded that there is “very strong evidence of sentience in octopods.”

This was an important finding because, on November 19, 2021, it led to the UK government’s announcement about amending the Animal Welfare (Sentience) Bill.

Just one month later, news came to light that the Spanish multinational, Nueva Pescanova, has “won the race to discover the secret to breeding octopus in captivity.”

This was in order to “start marketing farmed octopus next summer, to sell it in 2023” – something that activists, scientists, and conservationists alike have long feared.

Eating octopus isn’t something new. They’ve featured on menus around the world for years, including my local YO! Sushi in Bristol, UK. But as the demand for octopus dishes rises, populations of wild octopi decline.

This feels somewhat inevitable since, despite all the warnings, we can’t seem to stop ourselves from overfishing the planet.

As a result of this increasing consumer market, the food sector has been eager to find a solution to dwindling supplies. It’s turning its attention to intensive farming methods.

However, the industry has huge obstacles to overcome in terms of how to feed and breed them efficiently. This is because octopi are an asocial and carnivorous species.

There are also, of course, many ethical red flags raised when assessing the impact of intensive farming. This is on the foundations of animal welfare legislation – namely the Five Freedoms.

Factory farming is a modern form of farming animals that uses highly intensive methods, prioritizing profit over welfare. In this system, animals are robbed of any freedom to express normal behaviors and their lives are cut extraordinarily short as they head to the slaughterhouse at a fraction of their natural lifespans.

They’re selectively bred with the desired traits to grow quickly and are densely packed in overcrowded units with little to no environmental enrichment, which ultimately has a detrimental effect on their overall social, physical, and psychological wellbeing.

These conditions also provide an ideal breeding ground for disease.

What is aquaculture and why is it dangerous?

Aquaculture, the farming of aquatic animals, is a poor attempt to reduce overexploitation of wild fish populations and has become the world’s fastest-growing food production system. This is despite it being a relatively recent development.

There are a diverse range of fish species farmed across the globe. They include carp, sea bass, tilapia, salmon, trout, and tuna – which are housed in a variety of extensive freshwater pond or sea cage systems.

These systems have stocking densities ranging from low to high (each of which has its own welfare issues).

Worldwide, more than 1.3 trillion farmed fish are slaughtered annually and over half the seafood products lining our supermarket shelves have been intensively farmed.

The following all contribute to a reduction in water quality that increases pollution.

Mass escapes of farmed fish have also led to hybridizations and the transmission of deadly diseases to wild fish.

One of the more concerning issues with fish farming is its reliance on wild-caught fish to feed carnivorous farmed fish, which effectively increases the pressure of fishing activities rather than reducing it.

As already mentioned, octopuses are a carnivorous species. Therefore, in a farmed setting would require fishmeal and fish oils in their feed.

By their very nature, octopuses are solitary animals, highly inquisitive and remarkably intelligent.

With their blue blood, three hearts, and doughnut-shaped brains they’ve fascinated us. With their astounding self-sacrifice to brood their young, they’ve moved us.

Once a female octopus lays her eggs, she painstakingly weaves them together into long strands that she’ll then guard against predators.

Moreover, she provides a constant supply of fresh oxygenated water, gently wafting currents around them.

Unable to leave her clutch to feed, she is drained by her efforts and will eventually die of starvation and exhaustion.

For the farming industry, death before a second generation is a major challenge.

And, the impact of premature separation will undoubtedly cause a considerable welfare issue.

Due to this and the fact that octopi are often aggressive towards each other in confined spaces, the London School of Economics review also states: “We are convinced that high-welfare octopus farming is impossible.”

And yet, Nueva Pescanova aims to produce 3,000 tonnes of octopus per year.

So far, the company’s refused to reveal any details about the conditions in which the octopus will be held captive – “the size of the tanks, the food they will eat and how they will be killed are all secret.”

Aquatic animals are the least protected of all farmed species and at present, there are no scientifically validated methods for their humane slaughter.

With the explosion of plant-based alternatives on the food market, further development of animal agriculture is a clear recipe for disaster.

To end animal cruelty, protect the planet and improve our health it’s time to divest in unnecessarily destructive practices and go vegan. Our future depends on it.

The post Octopus Farming: Why It’s Travesty For Animal Welfare And The Environment appeared first on Plant Based News.