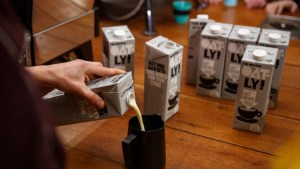 Oatly, the largest oat milk company in the world, is set to open its third production facility in Texas, US next year. But it’s come as the firm is accused of bullying over a trademark claim for the term ‘barista’.

Whilst it’s still pending, the giant is taking on another UK-based drinks company, according to reports.

Since making the headlines for taking on an oat milk brand, Oatly is now calling on Nottingham-based Skinny Food Co to stop labeling its syrups and non-dairy creamers ‘Skinny Barista’, The Times reports.

A spokesperson for Oatly told the outlet it had ‘in no way stopped Skinny Food from using Skinny Barista’. Rather, it ‘only questioned their registration’. This is until it is confirmed whether ‘barista’ can be trademarked or not. And, Oatly says this is a ‘completely administrative process and is not a court matter’.

Additionally, the company confirmed: “Whilst waiting for the decision, Oatly has opposed to others trying to register ‘barista’ as a trademark for plant-based milk-alternative products. If we didn’t, that could stop Oatly from using it if it is decided to be a trademark. In the same way, other brands have vigorously opposed Oatly’s registration.”

Skinny Food is set to argue the brand can’t monopolize the term. It’s also used by a host of brands from Sproud, Alpro, Mighty Pea, and Minor Figures.

Earlier this summer, Oatly sued Glebe Farm Foods, an oat milk company based in Cambridgeshire, England, over a trademark infringement.

It accused the brand of having too similar a packaging style and urged it to stop using the name PureOaty. Additionally, it sought damages and legal costs.

But the family farm won the battle at High Court two weeks ago.

Phillip Raynor, who owns the farm, said: “It is enormously gratifying that the judge has ruled in our favor, and to see that smaller independent companies can fight back and win.”

Speaking on the Skinny Food Co news, Rayner told The Times that the case shows ‘smaller independent companies can fight back and win’.

The vast 280,000 square foot site will produce 150 million liters of oat milk every year. This makes it the company’s largest US producer.

In Fort Worth, Texas, the facility will be home to the plant-based giant’s legendary oat milk products. It joins other North American sites in New Jersey and Utah.

According to reports, the Swedish company eyed spending more than $35 million to build the new location – offering over 100 jobs – earlier this year.

And, it comes just months after the brand opened one of the world’s largest plant-based factories in the UK.

Located in Peterborough, the site is capable of producing 300 liters of oat drinks each year – with a capacity to hike to 450 million.