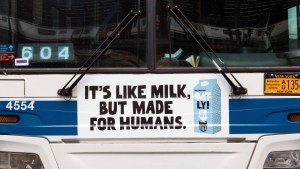 In total ASA received 109 complaints about the environmental claims made in Oatly’s 2021 ad campaign.

Along with complaints from the general public, A Greener World, which promotes sustainable solutions in agriculture, complained about Oatly’s advertising.

Complaints focussed on claims made by Oatly in a number of ads using the slogan: “need help talking to dad about milk?”. This appeared in the press, social media, and on television.

Not enough evidence for environmental claims

The ads compared the carbon footprint of Oatly’s milk with dairy milk and also compared vegan to omnivorous diets in general.

The firm failed to provide the evidence to back up most of its claims, as found by ASA.

For example, one of the TV ads subject to complaint was broadcast on January 21. It featured a man sneaking into his home and putting a bottle of traditional milk in the fridge.

He was interrupted by his son who questioned his choice of milk and text appeared on the screen that said: “Oatly generates 73 percent less CO2 vs. milk, calculated from grower to grocer.”

The ASA said the ad was misleading. This was because Oatly based the claim on comparing one of its products, Oatly Barista Edition, with full cream milk.

The ASA said consumers would understand the claim to include all of Oatly’s products.

The ASA said that consumers would understand this to mean worldwide, the transport industry had a lower environmental impact than the meat and dairy industry.

The claim overstated the emissions from the meat and dairy industry compared to the transport industry.

A third issue investigated by ASA related to complaints about a national press ad.

Oatly stated: “Today, more than 25 percent of the world’s greenhouse gasses are generated by the food industry, and meat and dairy account for more than half of that”.

The ASA said this claim was misleading because Oatly held meat and dairy to include fish and eggs, whereas consumers might assume it referred to a narrower definition.

A further issue related to Oatly’s claimed the following: “Climate experts say cutting dairy and meat products from our diets is the single biggest lifestyle change we can make to reduce our environmental impact.”

This was found to overstate the evidence and ASA said the claim was misleading.

ASA did not uphold complaints about a fifth claim. It read: “If everyone in the world adopted a vegan diet, it would reduce food’s annual greenhouse emissions by 6.6bn metric tons (a 49 percent reduction).”

The regulator said this was substantiated by a report from the Institute for Climate Economics.

The company is well known for its outspoken approach to marketing. This is seen with ads often referencing the negative environmental and health impact of animal products.

The alt-milk brand has also used unusual tactics for TV ads. Such as hypnotic spirals, pendulums, and subliminal messaging, intended to keep its oat drinks in the mind of consumers.

Most recently Oatly’s advertising has centered on a mini-series called The New Norm&al Show. This features oat-drink carton puppets trying to transition to a plant-based diet.