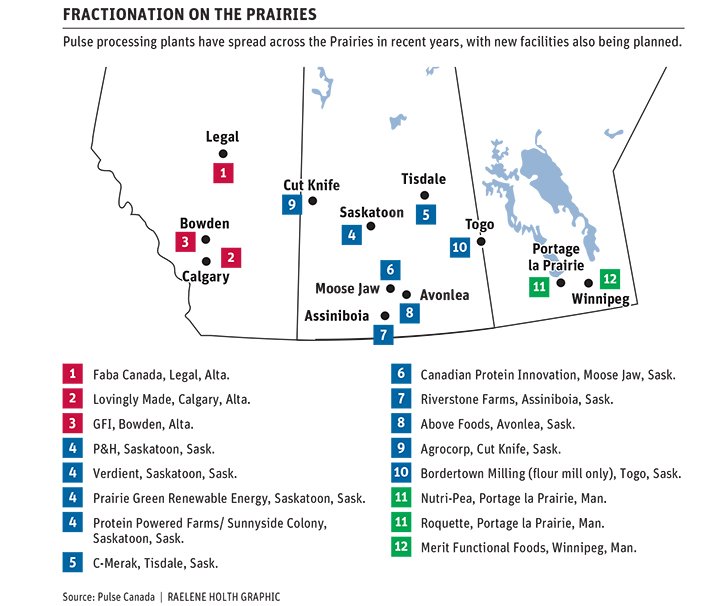 More Than Protein Ingredients Ltd. is building a $100 million facility in Bowden, Alta., that will produce protein, starch, fibre and feedstock molasses from the crop.

The plant is expected to be fully operational in the summer or fall of 2023 and will process 35,000 tonnes of peas annually, which are expected to be sourced within a 160-kilometre radius of the facility.

Allison Ammeter, an Alberta Pulse Growers director and former chair of Pulse Canada, is “thrilled” by the announcement.

Ammeter said it seems like the province has been one year away from having two or three fractionation plants for the past five years, so it is good to see one finally come to fruition.

“There are a number of groups that are working to get one going. I expect to see more,” she said.

She believes it will eventually lead to new Alberta businesses making products out of the protein, starch and fibre from the plant.

Ammeter said trucking peas to the plant in Bowden eliminates some of the supply chain risks associated with rail, containers, ports and ocean vessels.

“When you do more locally you sidestep some of those transportation issues,” she said.

Kevin McGeough, chief executive officer of More Than Protein Ingredients, said the biggest selling feature for the protein isolates that will be produced at the plant is consistency.

Many manufacturers of alternative meat and dairy products have consistency problems with pea protein from China.

They say it is made from a hodgepodge of peas that China grows and imports from around the world, including Canadian peas. The manufacturers say there is too much variability in the resulting product.

“They constantly have to adjust their formulations because of the inconsistency of that supply,” said McGeough.

More Than Protein Ingredients is in discussions with a handful of food manufacturers located in Western Canada.

“At this point we can pretty much sell all our production within Alberta and maybe a little bit to B.C.,” he said.

Both products are used in the production of meat and dairy alternatives.

The Bowden plant will also produce yellow pea starch for making products like glass noodles, as well as fibre and a feed product.

One of the founders of the company is Chris Chivilo, former chief executive officer of W.A. Grain and Pulse Solutions.

Chivilo is an employee of More Than Protein Ingredients. McGeough was brought in as a management consultant by Chivilo before taking over as CEO of the company.

Ammeter, who is also the former chair of the Plant Protein Alliance of Alberta, isn’t worried about Chivilo’s involvement in the venture.

“It doesn’t give me any pause because I know Chris and I know how hard he has worked for the industry,” she said.

She believes the demise of W.A. Grain wasn’t an issue of malfeasance, it was due to a number of other factors.

“Chris, to his credit, did his very best to make sure that nobody ended up getting shafted as things fell apart,” said Ammeter.

McGeough said More Than Protein Ingredients will have a sizable research and development division, including a crop-breeding arm.

The firm has been conducting crop trials with a number of high-protein pea varieties. It is running test plots in Alberta at Lethbridge, Olds and Bowden.

It intends to start contracting acreage with growers in 2023 to grow the varieties it deems to be the most suitable for processing.

Every extra percentage point of protein it can get out of those peas will have a significant impact on the firm’s bottom line.

The facility will also have a dedicated research and development production line that will be used to develop processes for other feedstocks, starting with lupins.

“There is no commercial-scale research and development plant in North America that we know of,” said McGeough.

He said there are potential downstream customers who are interested in lupin protein because it is well-suited for the dairy industry. But there are challenges processing the crop because it has a thick hull and high fat content.

Working out the processing kinks with a commercial-scale production line will be key to avoiding some of the pitfalls other fractionation plants have experienced with engineering delays and cost overruns.

The goal of the research and development line is to improve functionality and to alter the plant ingredients in ways that make them perform closer to animal proteins.

“That’s what I would call protein 2.0 and that’s the future of the market,” said McGeough.