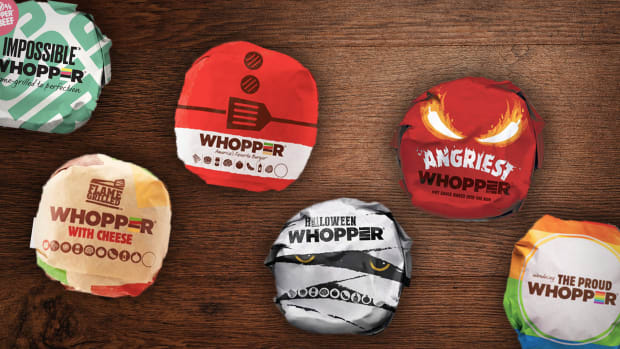 The two fast-food giants know what the people want (bacon) but Burger King has added another all-star ingredient to its latest Whopper.

For a long time -- think decades -- burgers came in two main varieties, with cheese or without it. Sure, you could play with basic toppings like lettuce, tomato, pickles, onions, as well as condiments like ketchup, mustard, mayo, or maybe even relish, but that's where hamburger innovation stopped.

Starting in the '80s, fast-food chains including McDonald's (MCD) - Get McDonald's Corporation Report, Restaurant Brands International's (QSR) - Get Restaurant Brands International Inc. Report Burger King, and Wendy's (WEN) - Get Wendy's Company (The) Report began trying lots of new ideas. That led to the rise of the bacon cheeseburger, which joined the hamburger and the cheeseburger as default options every fast-food chain offered.

It did not stop there. Burger King, McDonald's, and Wendy's have tried endlessly to innovate the hamburger. That has led to bizarre limited-time offers and widely accepted new ideas like putting barbecue sauce and onions on a burger.

Burger King has been the clear leader in pushing new burger concepts (often new takes on its classic Whopper sandwich) and now it has a new idea that both answers Wendy's signature sandwich and takes it a step further.

Burger King has used its most-famous brand to get attention for new sandwich offerings. That has included some novelty ideas like the Halloween Whopper to more practical takes on the famous sandwich.

Now, Burger King has a new Whopper and it's a sort of challenge to Wendy's popular Baconator sandwich. The new Southwest Whopper, which comes in four varieties. does not offer bacon in the quantity Wendy's does on its famous sandwich, but it uses it along with another beloved ingredient.

The presence of bacon, of course, makes the Impossible version decidedly non-vegetarian, but it gives customers more options. Here's what's on each new Whopper, according to Chewboom.

"This quarter, we demonstrated our balanced approach to menu innovation and value for money while keeping our core equity the Whopper top of mind," he said. "We kicked off the year with a new $5 Have It Your Way Meal, featuring a Double Whopper Jr."

The chain also took steps to protect the status of the Whopper as a premium brand.

"In addition, in order to treat the Whopper as a powerful multibillion dollar brand that it is we removed the legendary burger from our core discount offerings and added some fan favorite variety, the Big King and quarter pound King to our new two for five offer. This shift resulted in a win win a more profitable line-up for our franchisees and a more compelling offer for our guests, with the shift from two for six, to two for five," he said.

Burger King also used the Whopper to drive adoption of its digital channels.

"At Burger King, Whopper meals performed well on digital channels and marked the first time we offered exclusive builds and meals through our digital platform," the CEO added.