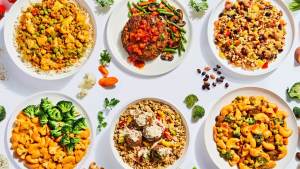 Freshly is a weekly subscription service that delivers fresh, cooked meals. A team of chefs and nutritionists developed the meals without artificial ingredients, chemical preservatives, and highly processed sugars.

Freshly is introducing six plant-based options under its Purely Plant brand. Customers can reheat the meat-free meals in around three minutes.

Demand for plant-based food climbs higher all the time. A report from earlier this year found that the US vegan food market increased by 27 percent during 2020.

This is nearly twice as fast as the total US retail food market, which grew by 15 percent.

According to Freshly, 65 percent of its customers identify as ‘flexitarian’. Flexitarians eat mostly plant-based meals but occasionally consume animal products.

Freshly Founder and CEO Mike Wystrach said the company is ‘thrilled’ about the new additions.

“We’re thrilled to provide our customers with a convenient way to incorporate minimally processed, plant-based meals into their routines,” he said.

“We recognize that it can be challenging to eat a more plant-based diet without sacrificing on taste; but with the launch of Freshly’s Purely Plant, we’re laser-focused on delivering a variety of delicious, convenient, and better-for-you meal options, while also supporting flexitarians looking to make simple changes towards a more plant-based lifestyle.”

Some consumers may be weary of supporting Nestlé for ethical reasons.

Read more about the issue here.