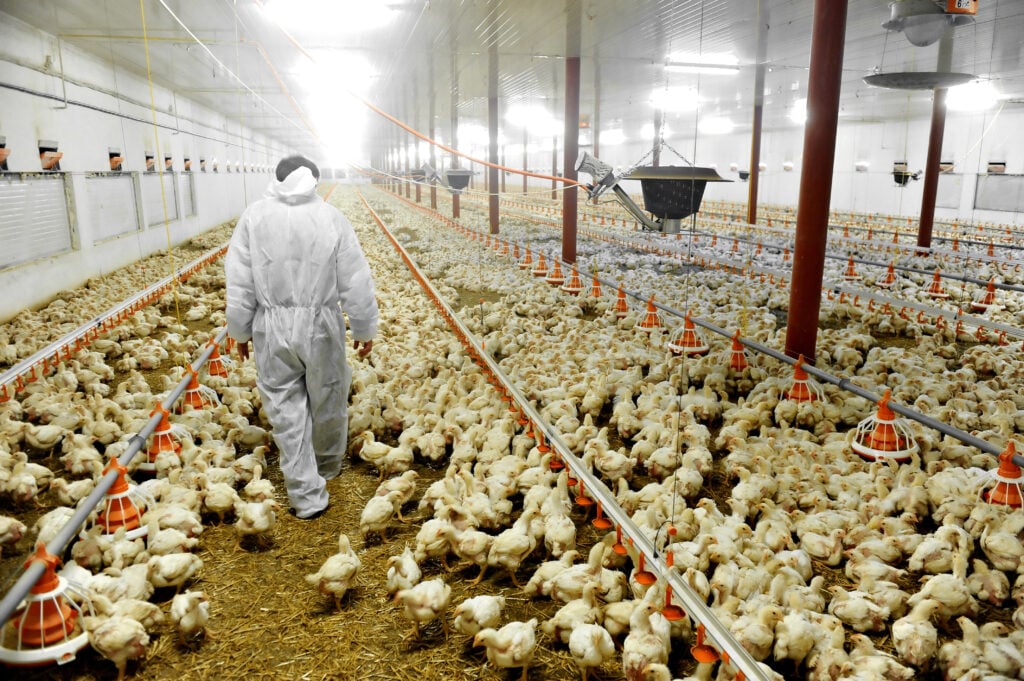 A majority of UK adults think that the factory farming sector disregards the climate crisis and animal welfare in favor of higher profit margins, new research has found.

Animal welfare charity Compassion in World Farming (CIWF) commissioned YouGov to conduct research into public opinion surrounding existing farming systems. Data revealed that 69 percent of UK adults see factory farming as prioritizing profits over tackling the climate emergency. It also found that 81 percent stated that profits were placed ahead of care for livestock and other animals.

The data was collected to support CIWF’s End of the Line for Factory Farming campaign, which launched on November 12. It has already garnered celebrity support from Jane Goodall and Emmy Award-winning actor Brian Cox, amongst others.

“Tackling climate change is one of the most important undertakings of our time – but to turn the tide on this crisis, we need to address its root causes – and animal factory farming is one of them,” Cox said in a statement.

“Far beyond the suffering it inflicts on animals, intensive farming is threatening the very future of our planet.”

In addition to deprioritizing environmental impact and animal welfare implications, factory farming was considered at odds with consumer wellbeing. Two-thirds (67 percent) of those polled stated that they think factory farming puts profits before human health. This could be referring to zoonotic diseases such as avian flu, superbugs in pork, and the COVID-19 pandemic.

“Our research shows that the British public aren’t convinced by industry propaganda that factory farming is ‘necessary to feed the world’,” Dr. Nick Palmer, head of Compassion in World Farming, said in a statement. “Big meat companies prop up a highly profitable system without accounting for the climate, health and animal welfare impacts they cause.”

As part of its research, YouGov surveyed participants from a total of 13 countries. Despite its traditionally meat-heavy cuisine, France showed similar levels of awareness to the UK. Three-quarters (75 percent) of participants agreed that factory farming disregards the environment in favor of profit. What’s more, 80 percent felt animal wellbeing was neglected as well.

Participants appeared to be concerned about factory farming’s impact on animal welfare. However, research conducted at the start of the year identified a significant gap in consumer knowledge. Vegan chicken brand VFC commissioned a survey of 5,204 people. It demonstrated that the majority have limited, if any, knowledge of how factory farmed chicken is produced.

Less than 15 percent of those polled knew that nearly all chickens in the UK are factory farmed. Furthermore, many believed them to be slaughtered between three and six months old. In fact, most are killed at around six weeks old.

After being shown images from a typical chicken farm, just 16 percent of people were willing to eat meat produced there. This tied in with around 80 percent stating it is important to know where food comes from.

Despite the YouGov findings, the UK population remains largely in the dark about the environmental impact of animal agriculture as a whole.

Climate and food experts, including the UK government’s appointed food tsar Henry Dimbleby, have called for a drastic reduction in meat and dairy consumption to stave off the climate crisis. However, UK consumers think locally produced products are the answer.

In a recent survey, again conducted by YouGov, it was revealed that 41 percent of participants believed eating local meat and dairy was the most effective way to reduce animal agriculture emissions. However, transport accounts for a relatively small (10-20 percent) proportion of animal farming’s emissions.

Animal agriculture – including rearing animals for meat and dairy – is responsible for at least 14.5 percent of all human-caused greenhouse gas emissions. It is also a major driver of deforestation, further exacerbating the climate crisis. This is particularly true in the Amazon rainforest, one of the most valuable natural carbon sequestering sites in the world.

The post Most Brits Believe Factory Farming Prioritizes Money Over Animal Welfare And The Planet appeared first on Plant Based News.