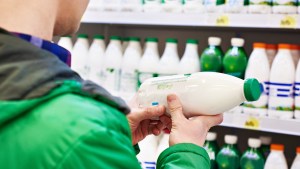 Morrisons is abandoning the use-by dates on its own-brand cow’s milk products and pushing for customers to use a “sniff test” instead.

It comes as research indicates that dairy milk is one of the most wasted food and drink items in the UK.

And, that the country chucks a staggering 3.1 million gallons of it down the drain every single day.

The British supermarket giant will maintain best-before dates on the products, which indicates when the cow’s milk is at its highest quality.

However, the use-by dates, dubbed to be the “most important to remember” by the UK government’s Food Standards Agency (FSA) are to be scrapped.

Instead, Morrisons is urging customers to give its milk a “sniff test,” and if it has curdled or smells sour, to avoid using it, The Guardian reports.

This will apply to 90 percent of its own-brand milks, which include an organic, Scottish, and For Farmers range.

The FSA draws its safety standards based on advice from the charity WRAP, which works with businesses to help reduce waste.

According to WRAP, cow’s milk is the third most wasted food and drink item in the UK. What’s more, the use-by date isn’t necessary on milk because it doesn’t meet the safety criteria.

Morrisons’ senior milk buyer is Ian Goode. In a statement, Goode explained: “Wasted milk means wasted effort by our farmers and unnecessary carbon being released into the atmosphere.

“Generations before us have always used the sniff test – and I believe we can too.”

WRAP is reportedly “delighted” by the move, marking the first UK supermarket to do so. And the charity hopes it can slash household food waste across the nation.