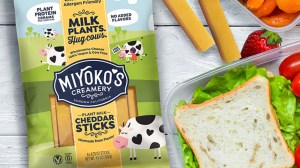 The plant-based dairy giant is offering a buy-one-get-one-free deal for a limited time to customers in the US.

The Plant Milk Cheddar Sticks are currently available via Miyoko’s website as a ‘sneak peek’. They retail at $4.99 a pack.

Offering 2g of protein, they promise to be kinder to both cows, children, and the planet. Each pack contains six Cheddar Sticks made from plant milk.

Aside from being lactose and dairy-free, they are also free from gluten, soy, and cashews.

It is not confirmed when the Cheddar Sticks will be available following the initial sneak preview. However, the company is offering the deal as a way for customers to try them out before they hit stores.

Miyoko’s is hoping to convince more people to ditch dairy. As a result, the company launched three giant electric billboards earlier this month.

The brand was commended two years ago after it helped a California dairy farmer switch the entire farm to plant agriculture.

It marks Miyoko’s commitment to supporting the farming community, in order to achieve a ‘compassionate food supply’.