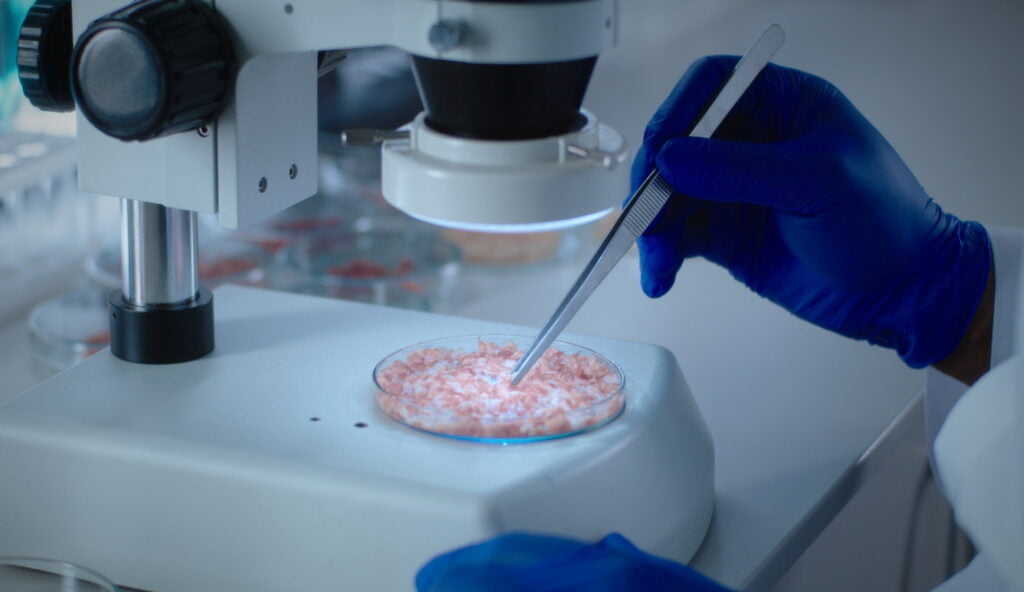 The race is on to get lab-grown meat onto your dinner plate.

Scientists already know how to cultivate stem cells into beef, chicken or pork as a sustainable alternative to farming livestock. The challenge now is to develop that process for large-scale production, and achieve “price parity” – so that a burger grown in the lab costs the same as a burger from a cow.

ProFuse, a startup in based in Kiryat Shmona, northern Israel, says it can cut production times by a third, increase yields by two-and-a-half times and significantly reduce costs, all by adding a microscopic catalyst to the process.

It all started with a chance discovery during experiments on mice. Dr. Tamar Eigler-Hirsh, Co-Founder and Chief Technical Officer, was carrying out her post-doctoral studies at the Weizmann Institute of Science, in Rehovot, looking into how they regenerate muscle tissue.

She had a “light bulb moment” in her quest to find out why some muscle regenerates (skeletal muscle after a gym session) and some does not (heart muscle after a heart attack).

She then spent the next six years researching and developing the muscle growing process she’d identified, until she was able to replicate it in lab grown meat.

As much as 90 per cent of the meat we eat is muscle. The key to cultivating meat in the lab is fusing cells together so that they form long muscle fibers.  It’s a process that can happen spontaneously in the lab, under the right conditions. But it’s very slow, and it produces small amounts of meat.

ProFuse has developed “small molecules” that meat cultivators can add to the mix to act as a catalyst, speeding up the process, and increasing yields.

Cultivated meat is an evolving industry. It’s not yet available in our supermarkets and restaurants, but it’s not far off. Singapore is the only country so far to give it regulatory approval. In December 2021, it said that US company Eat Just Inc. could sell its GOOD Meat brand of chicken nuggets. Other countries will inevitably follow and the potential market is vast ($140 billion by 2030, and $630 billion by 2040, according to estimates).

The world’s first cultivated meat burger hit the headlines in 2013, with a $330,000 price tag. Professor Mark Post, who created it in his lab at Maastricht University in the Netherlands, said six years later that the production costs had already plummeted to about $9.

Bringing down the price is critical and inevitable. “Our mission statement is to enable the vision of cultivated meat by reducing its cost and improving its quality,” says Guy Nevo Michrowski, ProFuse CEO. “The goal is to reach price parity with farm-grown livestock.”

Because it can develop more high-quality muscle faster, the process costs less, he says, and it doesn’t involve any genetic modification or antibiotics.

Rather than producing finished products, ProFuse plans to supply its biotechnology-based media supplements to cultivated meat companies to speed up their processes.

“If we don’t revolutionize the way we produce meat, we are not going to have enough meat by 2050 because the demand is going to double,” Michrowski tells NoCamels.

“And there is no way to scale up the cavemen methods that we are using today to grow meat. That’s why a new technology space is growing called cultivated meat, which is basically developing an industrial process for growing meat in a factory with no obvious involvement of animals, simply by taking one cell and growing it to be a steak.

“For this process to be successful, it needs to be achieved in price parity with farm originated meat, and it has to be tasty and nutritious, otherwise, nobody will buy it. For this to happen, there is a big challenge of how to scale it up.”

ProFuse helps scale things up by accelerating the lab growing process. “In order to make muscle, you start with stem cells and grow them into culture,” says Michrowski.

“You have to give them a specific signal that tells the cells to change their identity and to become muscle. Essentially, we found a way to enhance that signal by using molecules that we add to the cells.”

After 24 hours the cells begin to grow muscle fibers. “The simple process takes about 40 days, and would yield 1kg of meat. With us it takes 27 days, and yields 2.5kg of meat.

“And the cost savings is much higher than just the time saving, because it’s also what you actually get out of that time.”

The “small molecules” it produces are so small that all customers currently need is less than a pinch of salt, but when they scale up to full, industrial production they’ll use more.

Michrowski says: “The challenges are cost reduction and scale up and quality of the final product. You need to solve a lot of problems for all of those challenges to be met.

“We are not a single solution for all the challenges – cost reduction and scaling up and quality of the final product – we are part of an array of innovative, brilliant breakthroughs across the industry.

“However, we address muscle production, which generates 50 per cent of the cost of mass production.”