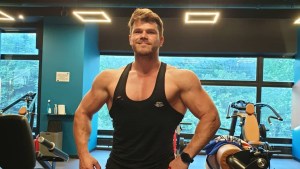 Acclaimed international cooking show, Masterchef, has selected its first vegan contestant on the Romania version of the show.

Alex Lenghel, a professional athlete, told Plant Based News he is “full of excitement and gratitude” to represent the vegan community on the show.

He joins the latest season of the competition, which is currently on air.

“I do give all credits to veganism for being the man I am now in all directions: culinary, mentally, physically, spiritually.”

The 36-year-old has a decorated history in the fitness world. This includes becoming a national champion in bodybuilding. He’s also won a host of competitions such as Pure Elite, Miami Pro, and 2 Bros Pros.

Lenghel went vegan in 2018 and says it has made no difference to his ability to lift heavy weights. Now, he’s known as “Massive Vegan,” which is also the name of a vegan supplements company he helped create.

Speaking to PBN he spoke of the experiences that led him to abandon meat and dairy products. And, how it’s permitted him to live “the best version” of himself.

“Being originally from a village in Romania, growing my own animals in the back garden, it was part of the culture and I grew up like this.

“I always farmed animals with love as my grandmother taught me, to be able to put food on the plate, such as eggs and milk,” he explained.

And while cooking was a big part of his early life, he didn’t pay much attention to the meat and dairy industry.

But upon moving to Bucharest he did some research on the animal agriculture system and was struck with compassion. It “filled my heart and soul, and something in me changed,” he says.

Lenghel adds: “My mind could not process the fact that I become part of this killing machine just for the joy of putting something in my mouth.

“There are so many other options to eat based on plants, without creating any harm to other living beings.”

When it comes to cooking, veganism opened his eyes to bountiful ingredients and flavors.

And now he hopes his appearance on Masterchef Romania will help others see that a vegan lifestyle is possible.

He says he hopes it can allow him to “give back.” And, will work to create the best vegan-friendly dishes he can.