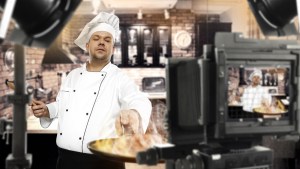 Global cooking show, Masterchef, has become the recent receiver of high criticism with questions arising over its high meat content.

It comes as Masterchef: The Professionals drew to a close on BBC One in the UK this week.

Both The Vegan Society and The Vegetarian Society hit out against the culinary program for its upholding of animal products.

“Are these programs turning into dinosaurs, not because more people are turning vegetarian and vegan but because many people are cutting out meat, particularly in terms of climate change?

“Where is that being reflected in the cookery shows?” asked chief executive of The Vegetarian Society, Richard McIlwain in The Guardian.

After a six-week run, the show was over for another season. And while it is deemed to “reflect” professional British kitchens, many say it is lagging behind ever-growing enthusiasm for plant-based dishes.

According to The Guardian, it’s prompted The Vegan Society to urge Masterchef to cast more vegan chefs. And, to challenge all participants to create Michelin standard plant-based dishes.

Further analysis by the news outlet indicates that 37 percent of meals on the show feature red meat, and 40 percent contain fish.

McIlwain added that he is “endlessly frustrated” by the meat-heavy inclusions.

Francine Jordan of The Vegan Society added that she was “disappointed” to see just two savory dishes that were vegan this year.

“Vegan food has never been more accessible, more exciting, and easy to work with. We have vegan haggis, vegan eggs, vegan bacon,” she told The Guardian.

Others have questioned whether the problem lies with the chefs themselves.

A Twitter user shared the article and said it’s because “A lot of chefs take issue with vegan and vegetarian. They seem somehow personally offended by it… I just think that means they’re a sh*t chef, to be honest.”