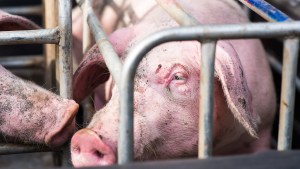 An animal welfare measure slated to come into effect on January 1, 2022, could result in an egg shortage across Massachusetts in the US. Pork supplies are also expected to take a hit.

The law, developed from a 2016 ballot referendum, prohibits the sale of eggs in Massachusetts from hens given less than 1.5 square meters of floor space each. Or, they must be able to spread both wings without touching the sides of enclosures.

Similarly, pork producers must also ensure their pigs are not living in enclosures in which they cannot lie down, stand up, turn around, and fully extend their limbs.

As of next year, keeping an animal in too small an enclosure could leave farmers with a $1,000 fine per violation. This applies to any sales of shell eggs too, as well as whole veal and pork meat produced by an animal kept in conditions that are not up to sizing standards.

Egg producers argue that resdesigning their current systems will be too costly and take too much time. However, advocates of the legislation point out that the industry has had years to make the changes.

Products that already contain eggs, such as baked goods, are exempt from the ruling; those sales can go ahead as normal.

Further, restaurants can still purchase eggs from suppliers that adhere to the space requirements. But according to the New England Brown Egg Council, more than 90 percent of eggs currently sold in Massachusetts do not meet the standards, and will therefore be unsellable.

“It will create a huge shortage,” the general manager of the Country Hen, Robert Beauregard, told Spectrum News. “I’ll probably be able to sell every egg that I have, because I am in compliance with the law. But it’s not all about the Country Hen. It’s about the consumers in Massachusetts and their need for this product.”

The news outlet noted that there are “not enough” eggs in Massachusetts for the state’s roughly seven million people. As such, some shoppers have begun “stockpiling” eggs and bacon, Mass Live reports.

Steve Vendemia, president of Hillendale Farms Connecticut, said back in June that the legislation will result in an “egg Armageddon.”

Gov. Charlie Baker commented: “The estimates that are out there is that first of all, for most people, you just won’t be able to access eggs at all and if you can, it’s anticipated the price point on those will be up 40 percent or more.

“That just won’t be an issue for people in the stores, that’ll be an issue for restaurants and for other food establishments. If you think about how hard life has been for everybody who pays their bills based on their work in restaurants, I think the last thing we should do is make it even more complicated for them.”

Industry players have been rallying for the legislation to be changed before the new year. Lawmakers discussed the issue last weekend, but at this moment in time, the legal plans remain in place.

‘The voters of Massachusetts spoke’

Mark Amato is president of the Massachusetts Farm Bureau Federation. He said despite the fact that the federation was against the 2016 referendum, the public’s voices should be heard.

“I know that the egg producers from out of state are quite anxious about this, unhappy about it,” he commented. “The fact is the voters of Massachusetts spoke, and we don’t think it’s appropriate for the legislature to be making changes like this.”

Animal rights groups have been championing for caging and spacing laws to change for some time – and not just in Massachusetts. However, many maintain that there is no humane way to keep birds and other animals confined for food purposes.

PETA, thought to be the world’s largest animal rights organization, pushes for the public to boycott animal products altogether. The group has previously made their stance on the matter clear:

“There is no humane or ethical way to eat animals—so if people are serious about protecting animals, the environment, and fellow humans, the most important thing that they can do is to stop eating meat, eggs, and dairy ‘products.’”

The post Massachusetts Farmers Outraged At New Law To Ensure Animals Have Space To Turn Around appeared first on Plant Based News.