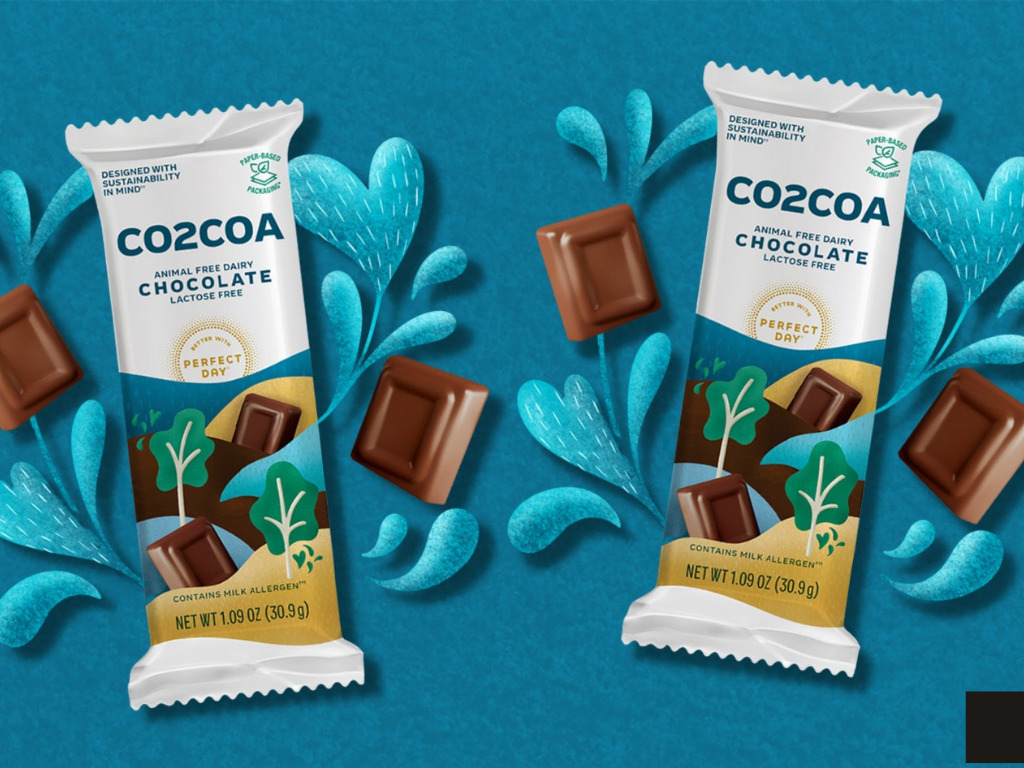 Global confections company Mars has partnered with Perfect Day to launch its first ‘earth-positive’ animal-free chocolate. Dubbed CO2COA, it uses Perfect Day’s animal-free whey protein to capture the taste and feel of conventional chocolate while tapping into the flexitarian and vegan consumer trend.

To double down on its sustainability credentials, Rainforest Alliance Certified cocoa has been sourced and the packaging is all paper-based. The CO2COA launch was on June 16 with the chocolate bars available while stocks last, throughout the U.S.

“At Mars, we bring our consumer-passion to innovation, developing on-trend innovations that support a world where both people and the planet thrive,” Chris Rowe, global vice president of research & development, Mars Wrigley said in a statement. “The creation of CO2COA is an inventive example of how we partner with technology innovators, like Perfect Day, to bring great new offerings to our consumers. We’re excited to collaborate with Perfect Day and continuing to explore the potential of alternative proteins to help create a more delicious and sustainable future.”

Mars is not the first to identify Perfect Day’s potential applications for the sweet treats sector. In March, Betterland Foods added Perfect Day’s whey protein to a new chocolate bar, following on from the two working together on an animal-free milk development. Designed to taste like traditional Snickers (made by Mars), it is claimed that the Woo bars have half the sugar and twice the protein.

“Partnering with a forward-looking leader like Mars to accelerate their innovation and sustainability initiatives is a hallmark example of how we’re extending our impact,” Ryan Pandya, Perfect Day co-founder and CEO said in a statement. “Today, companies big and small need to deliver on the needs of their consumers, who won’t compromise on taste or the future of our planet. We’re thrilled to help a world-class company like Mars do just that as we champion a path towards a more resilient food system for all.”

Working to its Sustainable in a Generation Plan, Mars has already made inroads into improving its overall operational footprint. In October 2020, the company claimed to have made good on a promise to remove deforestation-linked palm oil from its entire supply chain. It is slated to have managed the endeavour by condensing its global value chain and implementing increasingly rigorous mapping and monitoring of those that remain.

Last year, Mars announced its plan to sell its Skittles brand in fully biodegradable wrappers, by early 2022. It revealed that it was working with Danimar Scientific to produce home compostable packets that would be soil and marine-friendly.

While Mars focuses its attention on upping the sustainability credentials of its chocolate, startups around the world are looking to circumnavigate traditional unethical practices linked to the sector.

All photos by Mars, unless stated.