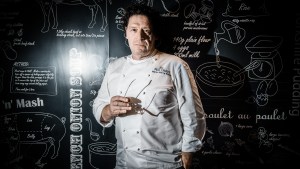 Acclaimed chef and television personality Marco Pierre White has spoken up for veganism since transforming his health and losing five stone.

The 60-year-old restauranteur, who owns abundant steakhouses across the UK, had an “amazing” nine months on a vegan diet.

He soon felt the benefits, revealing he had “a lot more energy” as a result.

White also saw improved sleep and a sharper sense of smell. “I lost an enormous amount of weight,” he added in a recent interview with i news.

The switch came after he was inspired by his daughter and her friends -all of whom “rarely” eat animal products.

However, it wasn’t all positive, as White exclaimed he “never felt fulfilled” when he strayed away from animal products. “An hour later I was hungry,” he added in the interview.

But now, the Hell’s Kitchen star has launched a meat-free cookery course with BBC Maestro.

On the course, he explains: “Dishes which I may once have foolishly considered just the garnish on a plate have now become wholesome, spectacular, and delicious centerpieces.”

In fact, just a few months ago, the chef announced he will affix 3D-printed plant-based steaks to his restaurant menus.

Courtesy of Redefine Meat, the steak alternatives are made with cutting-edge technology. White said he was “mind-blown” when he tasted one, and keen to help people reduce their meat consumption.

According to reports, the vegan offerings will be on sale for the same price as beef steaks.

The post Marco Pierre White Speaks Up For Veganism After Losing 5 Stone On Meatless Diet appeared first on Plant Based News.