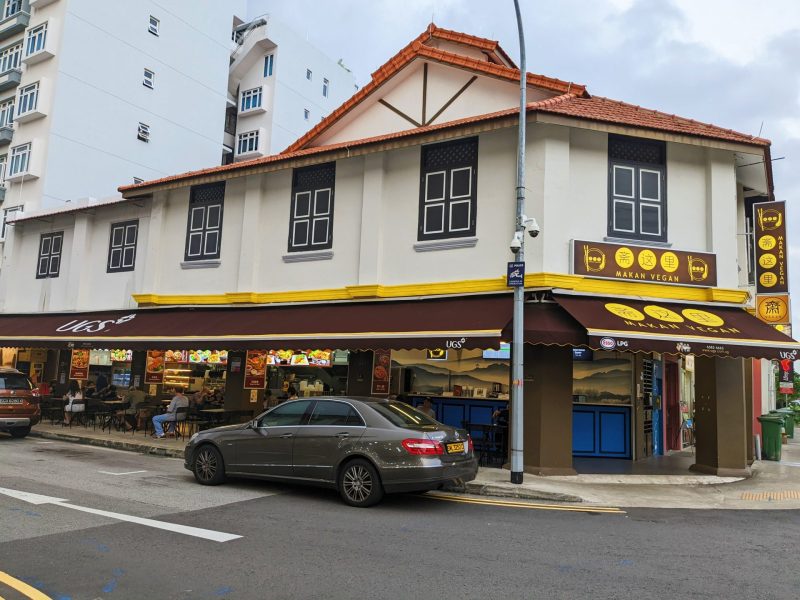 Being of Indian origin, I’m generally quite picky when it comes to vegetarian food that’s outside our cuisine. This is because although I’m a meat lover, we predominantly grew up on a veggie diet that sets the bar quite high. So when I first heard of all the positive reviews about Makan Vegan, I was both intrigued and sceptical. The only way to clear that up was by trying it out for myself!

As I entered, it took me a minute to understand how their system works. The kopitiam is called Makan Vegan, and within it, there are four food stalls and one drinks stall. They don’t have any specific names listed so they all just come under the Makan Vegan umbrella. I’d gone on a weekday evening and there were a decent number of people; not too crowded but enough to know that it was a favoured spot.

What I tried at Makan Vegan

There is a mala hotpot stall, a western stall, a noodles and rice stall, one for wanton and fish dishes, and finally the drinks stall. Did I mention that their speciality involves replicating vegan food to look exactly like non-vegetarian items? It was quite hard for the vegetarian friend I had brought along to digest the fact that he would have to choose between items like Fish Soup (S$5.80) and Lor Mee (S$5). It took me a bit to convince him that everything was indeed meatless, eggless, and dairy-free as their sign declared.

Be warned, they have tricky timings for the serving of a few of the dishes. I wanted to try the much raved about Laksa (S$5) but it’s available only on Tuesdays, Thursdays, and Saturdays between 8am to 2pm. You also get to taste the Lor Mee only on Wednesdays, Fridays, and Saturdays between 8am to 2pm. I finally settled on another crowd favourite— the Duck Rice (S$5.80) that’s available daily from 11am to 7pm.

I was excited to see if it really looks as good as it does in the pictures online, because I truly wouldn’t have guessed that the items weren’t non-vegetarian based on those. It did not disappoint, and this was verified by my vegetarian friend’s hesitation in diving into the food. Along with the Laksa, we also got the Wanton Noodles (S$5), and the bestseller Trio Milk Tea (S$3.50 for hot, S$4 for cold) upon their recommendation.

I first dove into the Duck Rice and immediately understood why it was a favourite. The “duck meat” only looked like it but did not try to mimic its taste which was the best part. I often feel that most vegan food fails at the part when they try to imitate the taste of the meat. The cooking here was done to elevate the tofu itself and it shows. The pickled cabbage on the side makes for a great addition. The dish packed quite a bit of flavour and for just S$5 it left me pleasantly satisfied.

I next tried the Wanton Noodles which we had asked for with extra spice. They have the option of both dry and soup and we went with the former. The noodles were cooked perfectly and I’m glad for the extra lick of chilli that came with it since the dish had some sweetness, too. They balanced each other out quite well but remember to ask for the extra spice if you’ve got a decent tolerance for it. It came with a side of warm cabbage soup that complemented the dish well. I’m not a mock meat fan in general but here again, I enjoyed the vegan “char siew” quite a bit.

Their range of Vegan Bubble Tea is yet another talked-about item. Their Trio Milk Tea is a combo of red tea, oat milk, and wheatgrass tea (it’s the cool, green one at the bottom). Shake well before having it— this picture was taken pre-shaking to capture the pretty and colourful layers. The wheat taste is obvious, and the oat milk hits you too. There is an adequate amount of sweetness attached to it, but I don’t really swoon over oat milk. I’ll probably give their Brown Sugar Creme (S$5.30) a try the next time as it’s more my thing.

There were so many dishes I wanted to try out because of how fascinated I was by what they offered— great-tasting vegan food that looks so much like meat, and at kopitiam costs! A dish I definitely wouldn’t have minded going for is the Vegan Curry Rice (S$5.80) that’s available daily only from 11am to 7pm. Another one would be the Fried Wanton (S$5). You can also purchase a jar of Vegan Kaya (S$10.80 for 280ml) to take home and surprise your vegan friends.

If I had to rank them all, the Duck Rice was the star of the evening for me, followed by the Wanton Noodles which I thoroughly enjoyed, and then the Trio Milk Tea. Altogether, they made for a fulfilling and filling dinner.

The chill vibes and soft buzz of people made for a delightful time. It’s a great place to catch up with pals and could even make for a good and cheap date spot. I strongly feel that you don’t have to only be vegan or vegetarian to appreciate the experience.

What’s also cool is that part of Makan Vegan’s proceeds goes towards The Makan Initiative which feeds the elderly and needy. They also hope to promote a healthy, vegan lifestyle through this programme. Be part of a good cause while also helping the planet and yourself! Conscious living is the way to go and having some delicious food in the process is a great motivator.

Am I Addicted: Vegetarian Korean cafe with Instagrammable food doubles up as a pottery studio

The post Makan Vegan: Is it not meat? Tasty & affordable vegan dishes like duck rice & laksa at Geylang appeared first on SETHLUI.com.