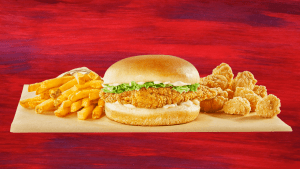 Two major fast food chains in Canada – KFC and Mary Brown’s, which both specialize in chicken – are growing their meat-free range. It’s part of a collaboration between each company and Lightlife, a vegan and vegetarian meat producer.

KFC Canada is adding Lightlife’s meatless popcorn chicken to its menu. The product contains no animal ingredients and is cooked in designated fryers, but KFC notes that it “may” be cooked in the same oil as its animal-based meat.

“We’ll let our customers decide if they feel it’s suitable for them,” the fast food giant writes on its website.

During the pilot period, KFC sold more than a month’s worth of meat-free chicken sandwiches in just six hours, according to Samantha Redman, chief marketing officer at KFC Canada.

“Seeing the extraordinary demand for Plant-Based KFC, we worked quickly to bring these menu items to our restaurants across Canada,” Redman said in a statement in 2020.

Now, KFC is making the option more widely available, with the burger now being offered at nearly 600 outlets across the country.

It’s hot on the heels of an announcement made by KFC US. Just yesterday (January 5), it was reported that the chain was bringing Beyond Fried Chicken to all of its roughly 4,000 US stores.

Meanwhile, Mary Brown’s is debuting its first-ever meatless chicken option – but for a limited time only.

The chain, which has around 200 stores in Canada, will offer Lightlife’s Plant-Based Tenders as well as Lightlife Sidekick Snack Sandwiches.

“We’re listening to what Canadians are saying and how their food tastes are changing. So while chicken is at the heart of our menu, we also want to satisfy the cravings of guests who are looking for delicious plant-based choices,” said Hadi Chahin, Mary Brown’s president and COO.

The Sidekick Sandwiches are available in Original or Sweet Heat, however both sauces contain egg. Moreover, the vegan chicken is cooked in the same oil as the animal-based version, Mary Brown’s confirmed to Plant Based News.