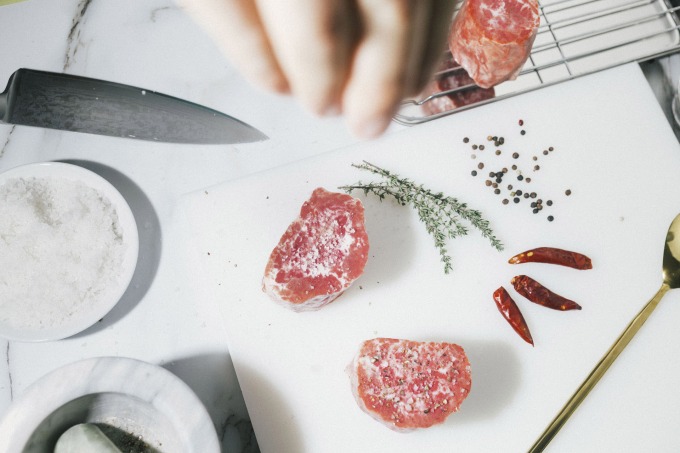 Convincing meat eaters to adopt a climate-friendly diet might get a little easier thanks to Slovenian startup Juicy Marbles, which has come up with a way to create plant-based whole meat cuts, if that doesn’t sound too oxymoronic.

‘Fancy Plant Meat’ is its pithier pitch for a product that aims to provide a vegan alternative to eating a filet mignon steak or other ‘prime’ cuts of (animal) flesh.

The Ljubljana-based startup is announcing a $4.5 million in seed raise to get its first hunk of prime plant protein to market — starting with the aforementioned (vegan) filet mignon, which is slated for a Q1 2022 launch.

Why filet mignon? It says this type of cut best shows off its proprietary “marbling technology”. It’s also picked filet mignon because the cut is considered the “crown jewel” of (meat) steaks.

Plus, there is relatively little competition at the premium end of the fake meat market vs scores of players churning out less fancy/more chopped up alternative protein products such as burgers, sausages, bacon, chicken tenders etc. So going big and chunky is one way to stand out in the sizzling alternative protein space.

“We’ve decided to begin with the filet mignon because it is the ‘crown jewel’ of the steak world, and it showcases our marbling technology best — which we would say is our clear and defining selling proposition, before we move onto other whole-cuts,” Juicy Marbles tells TechCrunch.

“We want to be known for our sirloins, rumps, filets, tomahawks, wagyus, as well as for our filet mignons — not just the most expensive cuts long-term. Long-term, our view is that we want to make filet mignon more affordable and accessible, given the different economics of it being plant-based.”

What are you actually chowing down on when/if you bite into a Juicy Marbles filet mignon? The primary protein is soy — which the startup argues is both nutritious and environmentally sustainable.

“Wider issues with soy farming causing deforestation are solely related to our need to feed animal livestock — 97% of soy production goes to animal feed, and if all of our meat was plant-based all the negative effects of soy farming would simply disappear,” it suggests, adding: “As a crop to feed humans, much less dense land-usage would be required for soya for purely human consumption – likely less than a third of the farming land currently required.”

Soya is also versatile, with Juicy Marbles noting that it can be eaten in all sorts of ways — from fresh to dried, plain, sprouting, ground, fermented, as curd, as a sauce, in soup, as a dessert or a drink etc — and, thus, by being a “soya-centric food company” it will therefore have greater flexibility in what it can cook up.

Concepts in the works include a soy-based tuna steak, for example. (Albeit, it would not be first to market with an animal-free tuna substitute; see, for e.g., YC-backed Kuleana.)

“Our business is based around the concept of protein texture — this is the defining factor that draws people to steak, when compared to a cheaper cut. In the plant-based meat vertical, there has not been as much innovation in the whole cuts space, and no one has come close to inventing a steak that resembles anything high-end,” it also tells us. “Given the need to decarbonise/offer a plant-based alternative in this space as well, we believe this is an immense opportunity untapped by our bigger rivals.”

“If you look at the plant-based products out there, the offers are currently limited to cheaper cuts — for example, the burger, or sausages, or bacon — there are also chunks, i.e. chicken tenders or tins of tuna, but there are no whole-cuts,” it adds.

Juicy Marbles is keeping the lid on exactly how it’s able to produce such large slaps of fake meat (claiming “numerous big food corporations snooping around” trying to figure out its protein marbling tech).

Although it says it will be more transparent in time — once it’s able to ensure its IP is protected.

It does specify that its plant steaks are not grown in a lab or 3D printed, saying it’s using its own patent-pending 3D assembly technology — which it claims enables it to create “premium, A5 grade cuts of meat, with full control over the shape, texture, marbling, flavours, aromas and nutrition”.

Of course the proof of all those claims will be in the eating. But Juicy Marbles suggests meat eaters should prepare to be wowed — both by the “high-level marbling effect” and “bold, rich flavour”.

And also by a price-tag that, at launch, will achieve “parity” with an “average-priced” filet mignon — and which it says will shrink so that the cost per steak will ultimately (“within 2-3 years”) be akin to paying for a more conventional cut of meat.

On the added benefits front, Juicy Marbles points out that plant-based steaks use non-saturated fats and are low in sodium vs meat equivalents — so there may be health reasons to consider switching to plant-based steaks (y’know, if the future of life on Earth isn’t a big enough reason).

Commenting in a statement, Danijel Visevic, general partner at the fund, said: “There has been a seismic shift in recent years towards plant-based alternatives, driven by a generation who want to make a real difference to the planet and their health. However, so often they’re met with poor substitutes, or they resist going fully plant-based because they’re not ready to give up on little luxuries, like whole cut meats. The team at Juicy Marbles acutely understands this. Their realistic and considered approach, combined with their technology — and appetites! — has seen them finally crack a major piece of the plant-based puzzle. We’re excited to join them and witness just how much of an impact they’re due to make in the months and years to come.”

Other investors in the round are Agfunder, along with a number of angel investors from Y Combinator and Fitbit.

Juicy Marbles says the seed funding will be used to scale production so it can launch its first plant-based steaks into the retail market.

It’s planning to sell to supermarkets, not just artisanal grocers and restaurants. But says direct to consumer sales will be limited to special offers only owing to the complexity of producing “planet-responsible” packaging for shipping perishable goods to individual consumers.

It’s also planning to expand its team and further beef up R&D efforts, including on developing new cuts.

“All of it is a learning cycle, so with the next round we can set up a gigafactory of plant meat to scale operations and further reduce the price of plant-based meat,” it adds.