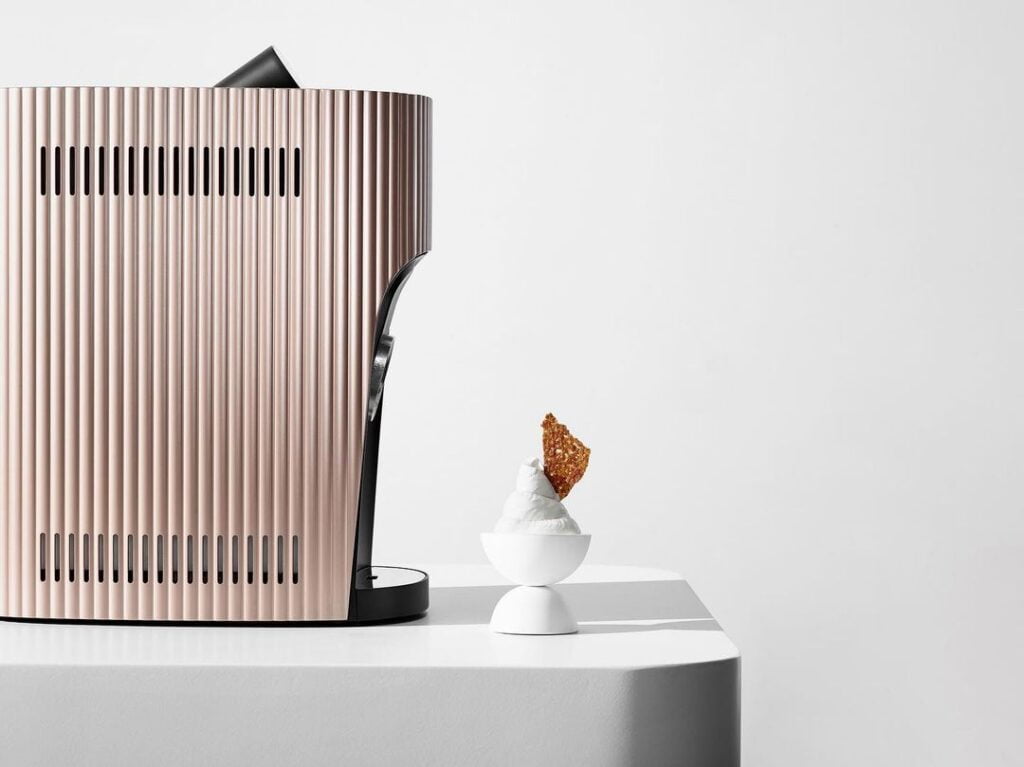 We’re all used to our coffee coming out of capsules within seconds. Now imagine the same thing with ice cream.

A machine invented in Israel uses a secret process to create super-fresh frozen desserts from liquid in just 60 seconds.

It whips up and freezes a range of gelato (lower-fat Italian ice cream), sorbet, frozen yogurt, smoothies, and even iced coffee.

Solato says it is the first to market with a frozen dessert capsule machine, and says it offers a range of flavors including Amarena cherry and mascarpone, piedmont hazelnut gelato, lychee sorbet, and classics like dark chocolate and vanilla gelato, as well as plain frozen yogurt.

So far they’re leasing the machines to businesses, but they don’t rule out sales for home use in the future.

“In order to eat ice cream at its perfect temperature, texture, and for people to really get the feel of what ice cream and real gelato is meant to taste like, you need to have it the moment it’s been produced. And the only way you can do it is if you have a single served capsule product,” says Lisa Mendelson, the company’s Head of Marketing.

“You are basically able to create hundreds of different flavors in one machine within 60 seconds. If you think of regular ice cream machines, like the ones at McDonald’s, you’re very limited with the flavors – it’s usually just two. And If you’re working with a more sophisticated machine, it’s very time consuming.”

Each cup-sized capsule of concentrate liquid makes a cup of ice cream. The unique code on each capsule is read by the machine to determine how much it needs to freeze it and how much air it needs to add, to increase its volume. The capsule itself, which is biodegradable, can then be used for serving.

“Any ice cream you make in a machine adds air and a freezing process – so the process in Solato isn’t anything new,” says Mendelson. “But what we have been able to do is create several different flavors in a very short period of time, and have it within a capsule.”

Solato uses natural ingredients that are locally sourced, such as pistachio and fruit from a farm in Upstate New York.

The machine can also be coded to read specific capsules, like nut-free and non-dairy recipes, to prevent cross-contamination and allergic reactions. It will simply refuse to read any other Solato capsule, even when it’s put inside.

Traditional ice cream and gelato are a hassle to transport and need to be maintained at freezing temperatures, which is not environmentally friendly. Solato uses a fraction of the energy because its capsules are lightweight, and its frozen desserts are made on the spot.

“We cut down on these chains of freezing. And that really allows us to save on nearly 90 per cent energy, as opposed to regular ice cream gelato that’s been produced. And it’s a big deal,” Mendelson says.

“Any gelato that you eat at a gelateria has been standing there for x amount of time, and has been frozen twice. It goes through an original freezing process, and then it’s been frozen while it’s waiting to be eaten.

“During this process, you lose quality – it’s been crystallized and it basically has 40 per cent more sugar than our gelato in order to keep it solid.

“You’re eating Solato immediately, when it’s the freshest and at its best temperature and texture, and without the extra sugar.”

Solato machines are connected to the cloud and each have a SIM card inside, so the company knows where they are at all times, what flavors have been consumed at any moment, and how many capsules have been used. That’s helpful for companies who don’t know what flavors to get during repeat orders.

The machines are leased on a monthly basis and companies pay “rent” if they don’t get through their agreed quota of capsules.

Solato launched in the US a year ago, and has top banks, like Amex, Morgan Stanley, and Goldman Sachs among its clients. It also has machines in iconic venues such as Madison Square Garden and the Barclays Center arena, as well as hotels, restaurants and offices. Solato also has machines in Israel, and it will be expanding to England and France next year.

“There’s no competition in offices today in terms of ice cream, but in restaurants, I think scoopable ice cream can be a competition because it’s frozen and faster. We don’t get to those temperatures because it isn’t fresh.

“But in offices I think coffee machines are a competition for us,” she says. “Even though it’s not a dessert, when people go out for a break they might have a coffee because it’s there and it’s accessible.”

In terms of commercial ice cream machines, she says there is no competition.

“There are two to three companies that haven’t launched yet because they are having issues with the cost of capsules and the technology they’ve created.”

One example is the Massachusetts-based ColdSnap, which similarly uses aluminum pods (Solato’s capsules are made from recyclable polypropylene) to create soft serve, frozen yogurt, and frozen smoothies, coffees, and cocktails in less than two minutes.

“I think one of our biggest advantages is that our R&D happens in Israel, and the people who work for Solato were in the Israeli intelligence for many years, and had unlimited resources to work on technologies. So if they were creating robots five years ago, they’re now creating ice cream machines.”