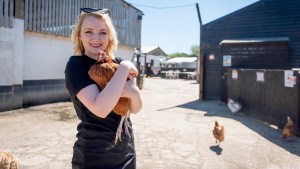 Acclaimed actor and vegan advocate Evanna Lynch has gone undercover in a factory farm for chickens.

The Harry Potter star visited a standard farm in the UK alongside Matthew Glover – Founder of Veganuary and VFC.

Lynch penned a blog post about the experience, which she described as ‘overwhelming’ and ‘chaotic’.

“We stop and pause once through the door to look out at 25,000 chickens crammed together under one roof,” she writes.

“You have to: it’s overwhelming. It’s chaos. So many bodies squashed together in one space, with no crates, no boxes, no shelter, no chance of a momentary reprieve from the utter havoc of thousands and thousands of scared, squawking chickens trampling all over one another.

“It’s impossible to fathom that each of these white feathered bodies are individuals. But, look closer and you will see that they are.

“By my foot, one little chicken is pecking around my shoe eagerly, apparently oblivious to the danger my kind pose.

“Another is attempting to preen his wing feathers even as his underside is soiled in feces, maybe the saddest display of optimism I’ve seen all year.”

During the investigation, Lynch witnesses a chicken on her back, with missing feathers and red raw skin.

“She is hours from death, moments maybe,” the celeb writes.

“Matthew invites me to approach her and help her to her feet but I’m scared of her oozing wounds, her expression of abject suffering.

“So, I hang back and watch as he carefully turns her onto her front and tries to help her to her feet, but she has no desire to get up again.”

Lynch and Glover visited a standard farm in the UK. Its living conditions mirror how 95 percent of chicken raised for slaughter in the UK – and 98 percent in the US.

“Nobody is heeding their cries of distress as an alarm bell signaling the dangers to come
if we continue to allow these places to keep existing,” Lynch concludes.

“Dangers like H5N1 bird flu that evolved on factory farms and has a 60 percent death rate.

“The fact that industrial animal farming has caused most new infectious diseases in humans in the past decade.

“Dangers like deforestation because we import 3.3 million tonnes of soya every year and funnel 60 percent of it into the poultry industry…”

The company created plant-based fried chicken using wheat protein. Its products are said to look, taste, and ‘pull apart’ like chicken – and are soya- and nut-free.

VFC has witnessed ‘phenomenal’ demand for its meat-free chicken and has already debuted in Spain after sealing its first-ever international deal with Vegan Nutrition.

Moreover, it aims to put broiler farms out of business and has incorporated a ‘rich seam of activism running through’ its branding.

In a statement sent to PBN, Glover said: “I’m a businessman turned activist. VFC is very much a marriage of the two.

“There are many ways to dismantle unjust systems. We intend VFC to be part of the movement that puts an end to factory farming for good.”

You can buy VFC’s plant-based fried chicken here. Use code PBN10 for 10% off

*This is a paid-for advertorial