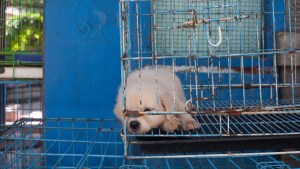 An Indonesian court has sentenced a dog meat trader to ten years in jail for the first time ever. This follows calls across the country for the dog meat trade to be scrapped.

The trader was caught illegally transporting 78 stolen street dogs on the back of a truck by Kulon Progo District Police earlier this year. Only 62 dogs survived the ordeal, animal welfare charity Dog Meat-Free Indonesia tells PBN.

It was the plan that the dogs be trafficked from West Java for slaughter in Central Java. Moreover, the journey stretched over ten hours.

But the trader has now been found guilty and given a ten-year jail sentence, as well as a $10,000 fine for the crime.

He violated multiple Animal Husbandry and Health acts, the court was told, due to not holding the animals’ disease or vaccination statuses and illegally taking the van over provincial borders.

They’ve long conducted investigations exposing the dog meat trade and its shocking realities: from injuries at capture or during transportation.

In a statement, Lola Webber of HSI said: “This verdict sends a strong message to dog meat traders that this brutal trade is illegal. And, won’t be tolerated in Indonesia.

“Ultimately we want to see an enforced nationwide ban on Indonesia’s dog meat trade. But in the meantime, this prosecution will also hopefully encourage the authorities in other provinces to use existing laws at their disposal to crack down on dog meat traders who continue to operate in their jurisdictions.

“There is no excuse for tolerating this illegal cruelty or the dangers the trade pose to public health and safety.”

Webber also stressed the risk of disease that comes with the trade. This is because dogs are regularly killed alongside other animals.

“In the face of such an obvious public health and animal welfare risk. We hope this will be the first of many prosecutions,” they added.