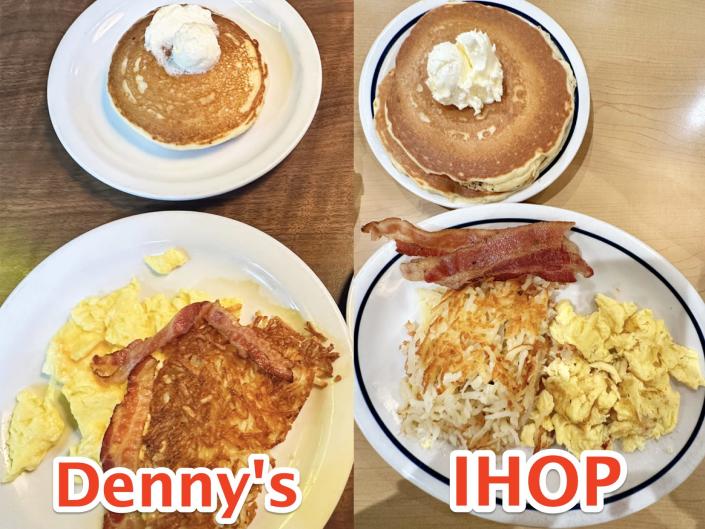 Denny’s and IHOP are popular for their breakfast menus.

The first Denny’s location (named Danny’s Donuts) opened in 1953 as a donut and coffee shop in Lakewood, California. IHOP was founded in 1958 in a suburban area of Los Angeles, California. Today, both are international chains known for their Grand Slam breakfast and large variety of pancakes, respectively.

Having grown up eating at both, I was curious about which one offered the better meal these days.

So I ordered the same plate of food — pancakes, eggs, hash browns, and bacon — plus coffee from each chain, reviewing the meal’s quality and value, as well as the restaurant’s atmosphere.

I checked out Denny’s first.

I visited a Sacramento county Denny’s nestled on a busy suburban street near my home.

Denny’s are often found near freeways, so this was one of those locations within the city. Parking was easy in the lot.

The lobby was nice and spacious, with a claw machine and bench to sit on. There were hardly any people there when I visited on a weekday.

I was seated at a large booth by a window.

I appreciated how spacious the booth was, and the banquettes were nice and cushy.

The table had menus advertising seasonal specials, a bottle of ketchup, and several pads of butter.

I’ve long associated Denny’s with a retro, 1950s vibe. There was a jukebox in the corner, but I wasn’t sure if that was just for decoration.

Music played on a low level over the speakers, and the whole restaurant was pretty quiet.

For $13.19 (before tip and tax), you can build your own breakfast platter.

My coffee came out first.

The coffee arrived quickly with a saucer full of half-and-half cups.

It tasted a bit dull and watered down but was reminiscent of a typical diner roast, so I couldn’t really complain.

There’s something comforting about a mug of diner coffee.

I got my food within 11 minutes.

There was nothing fancy about the presentation, but I didn’t expect it to blow me away.

The main plate had a scoop of shredded hash browns, a massive pile of scrambled eggs, and two flimsy pieces of bacon on top.

The two pancakes were served on a separate plate, which I appreciated since I can’t stand syrup touching my eggs.

Denny’s eggs were plentiful and tasty.

I guessed there was about three-eggs worth of scramble on my plate, and they tasted like they were made to order.

The scramble was warm, fluffy, and tender. Even though it didn’t have a lot of salt, the flavor and texture were great.

A few shakes of salt and pepper and a sprinkle of hot sauce elevated the eggs.

The shredded hash browns were fried to the perfect golden-brown color and had an extra-crispy, slightly darker exterior. Since I love crispy potatoes, I didn’t mind this at all.

The shredded potatoes tasted OK. They were a bit bland, but I added some salt, ketchup, and hot sauce to fix this.

Still, some of the potatoes clumped together like they had been cooked too quickly.

I felt a bit let down by the bacon.

I expected the bacon pieces to be larger.

Even though they were sort of flimsy, they were still crispy from end to end. But I didn’t find the flavor memorable.

I thought this bacon would’ve been fine on a sandwich, but it didn’t quite hold up as a standalone entry.

The real standout was Denny’s pancakes.

They were absolutely delicious. The salted butter kept them from tasting overly sweet, added a silky deliciousness that soaked into every crevice, and complemented the noticeable tang of buttermilk.

The server brought me a bottle of syrup that poured out slowly, which was nice for controlling how much I added to my pancakes. The topping was simple and sugary, pairing well with the salted butter.

Overall, the pancakes weren’t too sweet but maintained a moist and fluffy texture that offered a nice chew.

This was enough food for two people, so I had plenty of leftovers. The waiter kindly brought me a takeaway box.

I then dined at IHOP.

I visited an IHOP in Sacramento, California, a short drive away from my home. It was inside a strip mall, nestled between several other chain restaurants.

Growing up, the chain always seemed like a special treat because there were so few near me.

This location wasn’t crowded at all, and the host greeted me immediately upon walking in. If I had needed to wait, there was plenty of space to sit in the foyer and front of the restaurant.

IHOP didn’t feel like a diner in the way Denny’s did.

I was seated at a small booth in the middle of the restaurant.

The walls were decorated with large, close-up photos of pancakes that advertised various specials.

Like Denny’s, this IHOP was quiet, so much so I could clearly hear the conversations at the other booths.

I ordered the pancake combo.

IHOP’s menu is best known for its wide range of pancake options, but the chain offers a solid selection of breakfast combos that give you more bang for your buck.

I ordered the world-famous pancake combo, a spread of pancakes and your choice of meat, eggs, and hash browns. I opted for scrambled eggs and bacon again to keep things consistent.

The meal cost $15.49, before tip and tax. I also ordered a regular coffee.

My coffee came quickly with a saucer full of creamer cups.

Unlike Denny’s, which only provided half-and-half, IHOP gave me some nondairy creamers. I’m not dairy-free but still thought this was a nice touch.

The coffee had a strong, freshly brewed taste, which I preferred to the previous option.

The eggs, hash browns, and bacon arrived faster than expected.

The three foods were all served on a medium-sized plate.

My pancakes didn’t arrive until a few minutes later on a dish that was a bit too small — the food and plate were basically the same size, so there was little room for pouring syrup without making a mess.

Even though I got less food than I did at Denny’s, there was still enough to make this meal a good value.

Compared to the serving I got at Denny’s, I received fewer eggs than I expected.

Plus I thought they were slightly overcooked, with a light-brown crust on the edges.

On the other hand, the hash browns were memorable.

The shredded potatoes had a scrumptious, buttery flavor I wasn’t expecting.

Although I would’ve preferred them slightly more crispy, their yummy flavor made up for it.

As usual, I covered my potatoes with hot sauce or ketchup to give them more oomph.

I was pretty impressed with IHOP’s bacon.

The texture was thicker than expected, offering a more chewy rather than crunchy bite.

But the flavor was pleasantly salty, with slightly sweet and strong smoky undertones. It definitely had a much more memorable taste than Denny’s meat.

I dipped the bacon in syrup and enjoyed the scrumptious mix of salty and sweet.

IHOP earned its name with these pancakes.

On the rare occasions I went to IHOP as a kid, I always opted for whipped-cream-topped or chocolate-chip pancakes. I don’t think I’d ever eaten plain ones from the chain until this visit.

With lightly golden edges, these were thinner than Denny’s pancakes. Because they had less girth, they also seemed a bit floppier and less structured.

I doused a corner of my short stack with the regular syrup on the table, which had a more distinct maple flavor. The pour spout was wider than the one at Denny’s, so the topping ran out of the bottle quickly.

After the first bite, it was clear why the chain is called the International House of Pancakes. These were the highlight of the meal.

The texture was so soft, rich, and buttery that each bite pretty much melted in my mouth. It wasn’t quite the fluffy pancake I’m used to from diners but was something lovely in its own right.

My only qualm was they got a bit soggy from the syrup, but these pancakes were otherwise delicious.

I genuinely enjoyed dining at both chains, but I preferred IHOP’s breakfast slightly more.

It was quite challenging to choose a winner because both chains had strengths.

I found IHOP’s bacon better tasting and Denny’s eggs far superior. Plus the former’s hash browns lacked the tantalizing crispiness of the other chain’s potatoes but were more flavorful.

And, much to my surprise, Denny’s short stack actually gave the pancake house a run for its money.

Denny’s meal definitely offered more bang for my buck, but I still had leftovers from my IHOP platter.

Plus both restaurants were quiet and comfortable. Their atmospheres were pretty comparable.

In the end, IHOP was more expensive than Denny’s, but I could taste a clear difference in the quality of some of the ingredients, which ultimately gave the chain a leg up.

Read the original article on Insider

The post I dined at Denny’s and IHOP to see which was better, and the cheaper breakfast chain gave the pancake house a run for its money appeared first on REPORT DOOR.