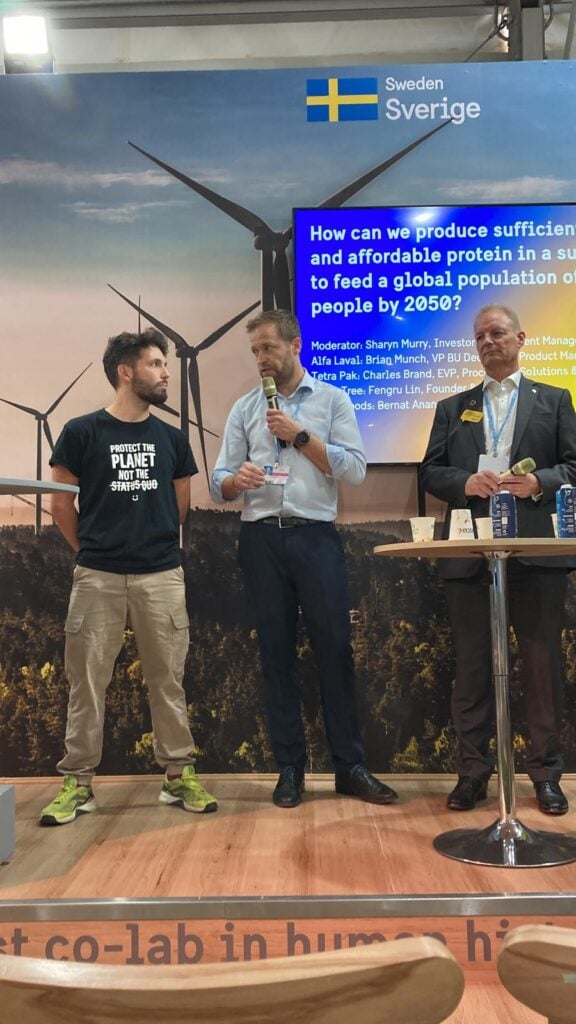 COP27, the annual UN Climate Conference, came to an end on November 18, 2022. It was this year held in Sharm El Sheikh, Egypt. The event has been heavily criticized over its failure to address animal agriculture’s impact on the environment. The UN has also sparked controversy for its decision to hold the event in a country with a terrible human rights record.  Bernat Añaños Martinez, food activist and co-founder of plant-based meat brand Heura, attended the event. Here, he details his experience.

I just came back from COP. I went there to represent my plant-based meat brand Heura, and to make sure that we were part of different discussions and panels to assure that the food system – and the need to move to a just and sustainable one – was a central part of the debate.

It was an intense experience. When I arrived, I could not believe that the whole event smelled like beef. All restaurants were serving beef barbecues inside the conference. Very few vegan options were being cooked and served, but this wasn’t the most surprising fact.

Unfortunately, there was something that was even beyond that.

Just after my arrival, I met this young activist. We started to talk, and she told me something that was shocking. She said the following words: “We are scared to share our thoughts and protest at this event.”

And I thought, how is this possible? How, at a climate emergency summit organized by the United Nations, are human rights not guaranteed?

The climate emergency is a humanitarian crisis

I said it in the panels, and I say it here and I will continue saying it. The climate crisis is a humanitarian crisis. This is not a division, this is not two different topics.

It is obvious that the activists at COP27, COP28, COP29 shouldn’t be scared of protesting and share their opinions. Human rights activists should not be imprisoned, which is something that is happening and has happened. Very few protests could happen because of people being scared.

The LGBTQ+ plus community should not feel scared of just being while there. And women should not feel misogyny or fear during the event. The event is a place where all the institutions, all the NGOs, companies, everyone comes together with the activists to push the solution for something that concerns us all in this space.

The least thing we could expect is that the United Nations and the governments where the event is held work on guaranteeing this. Because we cannot work in the urgent if we don’t have the basic. And this is the basic.

Throughout the whole week I was there, I heard that so many activists, young, older, from different countries were scared. And one sentence that I listened to most was: “I’ll share my thoughts when I go back to my own country,” or “if you want to talk with other activists while here download this app that is not being tracked”.

So how can this happen? I was just talking to the team and we just wanted to share it. This is very raw, but we have to work on that. And for the next COPs, in wherever place in the world we go, the United Nations have to guarantee not just these human rights during the event, but in the future as well.

In Egypt, where COP was held, the right to freedom of expression has been historically repressed.

According to Amnesty International, authorities continue to clamp down on critical voices, both offline and online. Peaceful protestors have also been arbitrarily detained.

Women also face discrimination in law and practice. Female social media influencers have been prosecuted for how they acted, dressed, and earned money on social media apps.

In July 2022, the UN was urged by a White House advisor and his partner to move the COP27 event due to the country’s treatment of LGBTQ+ people. They cited fears that they and other activists could be a target for security forces.

The couple said condemned the choice of Egypt to host due to “LGBTQ+ torture, woman slaughter and civil rights suppression.”

The post I Attended COP27 – The Event Smelled Of Beef And Activists Were Scared To Protest appeared first on Plant Based News.