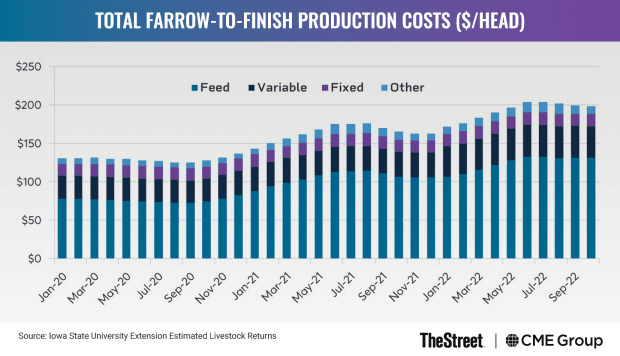 Designed to reflect the dynamic between the meat packer and the hog producer, pork cutout futures find footing as high costs weigh on producers.

Brian Oswalt is accustomed to price volatility when it comes to feed costs for his hog operation. As the hog production and risk manager for Maria Stein Grain Co., a farrow-to-finish business, he knows how to hedge his corn and soybean meal costs.

But it’s the rising costs of everything else that’s affecting the firm, he says. Labor costs are up, trucking costs are up, and prices to buy piglets are higher, too, Oswalt says. He’s been in his role at the Ohio-based company since 2008, and says in the past various costs would go up, but those higher prices didn’t stay elevated. That’s different now.“ At the end of the day, there’s just a lot of costs in the way we raise hogs,” he says. Prices are up significantly for pork producers in all facets of their business, and with the consumer price index still above 8%, it’s not likely to fall anytime soon. That means producers will need to think about ways to offset and mitigate their risks.

Holly Cook, a staff economist at the National Pork Producers Council, says pork producers are facing rising costs across the board. Some costs can be tied to covid supply-chain snarls and higher commodity inflation for inputs such as energy and feed, but some of the higher costs date back to before the pandemic.

One long-standing issue is a labor shortage, she says, something that’s been a factor for years, and she lists several reasons for the problem. The rural labor force has seen out-migration and is growing older, plus people, ages 25-45 who might have worked at hog operations can find less labor-intensive employment elsewhere. Throw in a reduced immigrant population that might have otherwise worked on farms, and it’s become a vicious circle.

Cook cites Bureau of Labor Statistics data showing through the first quarter of 2022 employment on hog farms was down 5% versus the year prior, coupled with an 11%-plus increase in wages.

Feed costs are pork producers’ top expense, Cook says. Grain costs were up last year and continued to rise in 2022. A drought in the western-U.S. Corn Belt reduced yields, while the war in Ukraine had an impact on grain prices, too. NPPC’s economic contribution study estimates that feed costs account for about 56% of total production costs, using a 10-year average. In the current environment, the feed costs for a farrow-to-finish operation now are 65%, Cook says. Then there are the non-variable costs, for inputs such as transportation, labor, and energy. An Iowa State University cost of production report shows the non-feed variable costs rose about 28% in 2022, she says.

It's unlikely producers will see any relief from higher prices any time soon, and one way producers may be mitigating their costs is by trimming hog herds, because it takes more money for producers to be profitable or at least break even.

“We haven't seen expansion in the industry, like what we would have expected in past years when we generally see some profitable months,” she says.

Large producers have hedged their operations for a while, and now brokers and risk managers are seeing an increase in the smaller producer opting to hedge.

The pork cutout contract was designed to reflect the dynamic between the meat packer and the hog producer, with the hog producer interested in getting part of the cutout value for their hogs, says Makenzie Billings, manager, agricultural, and alternative investment products at CME Group.

Producers were interested in capturing part of the spread between the price of the live animal and the cutout price, she says, noting that the spread could fluctuate with seasonal differences. Because hog producers have long-term contracts with meat packers, it’s an opportunity for producers to understand the formula makeup of the cutout price.

Looking ahead to 2023, he says he’s most concerned about his feed costs, especially corn. Although corn is down from the highs of over $8 a bushel, it is still the highest level seen in nearly 10 years.

“It’s probably more apparent than ever that they need to be managing their profit margins,” he says, adding that “producers who have been diligent in their risk management plans and process have been able to take advantage of the opportunities the CME afforded them and are fairly well positioned with their hedges, especially with feed. I think it’s the distant future, out into the next year or two that people are most concerned about.”