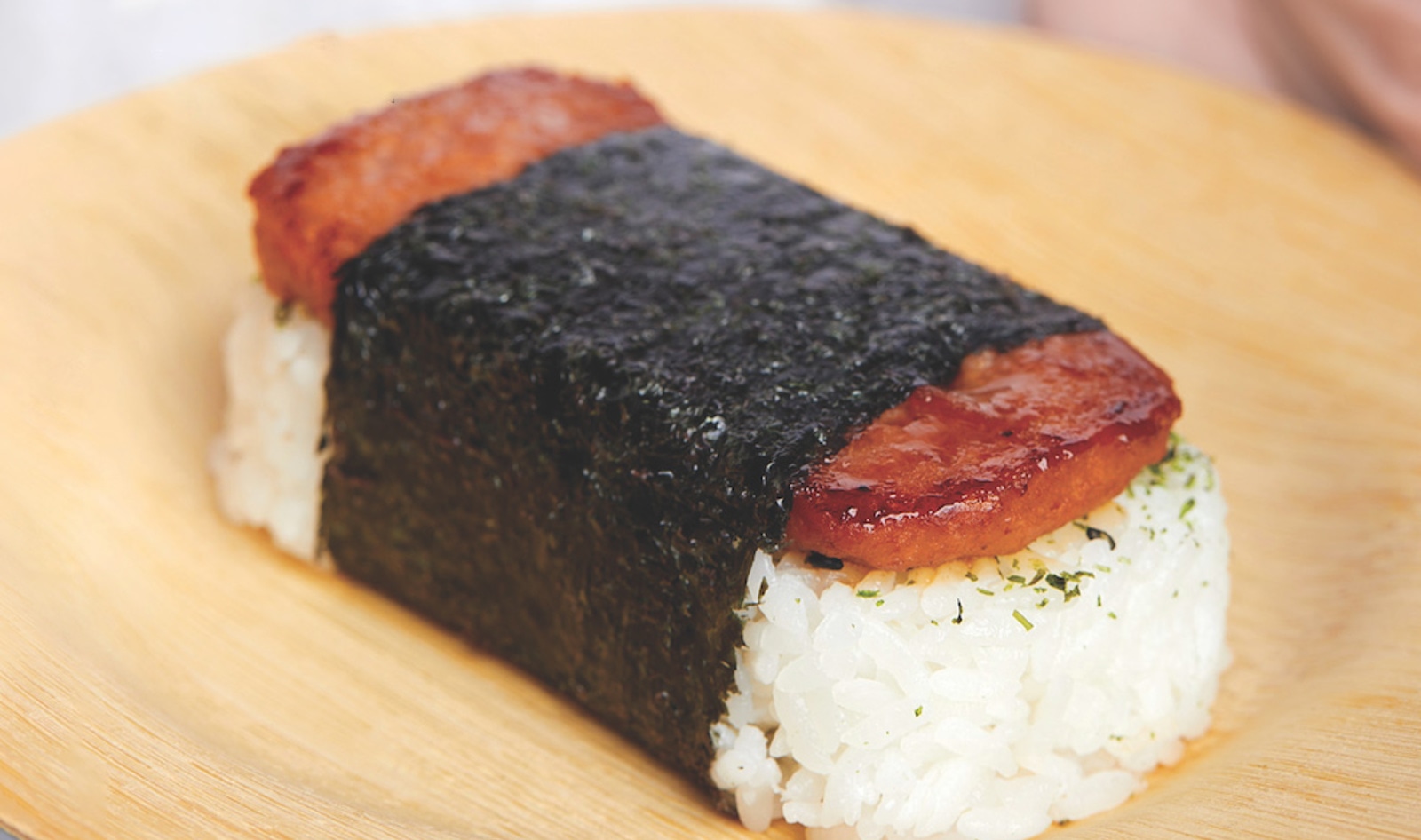 This month, leading poke chain Pokeworks is testing vegan spam musubi on its menu at seven corporate locations in Washington, New York, and California. The new menu item at the chain—which specializes in customizable poke bowls—was developed in partnership with Hong Kong-based vegan brand OmniFoods and uses its OmniPork Luncheon (a vegan take on Hormel’s SPAM) instead of pork to recreate fan-favorite protein Garlic Spam Musubi. Pokeworks is testing the new plant-based pork option in time for Veganuary, the campaign that challenges people to go vegan for the month of January and beyond.

“This partnership with OmniFoods is very exciting as we continue to find more plant-based alternatives that can be added to our customers’ favorite bowls at Pokeworks,” Steve Heeley, CEO of Pokeworks, said in a statement. “With sustainability as one of our core values, we are constantly looking for innovative ways to meet consumer demand that are both good for the planet and provide healthy options for mindful consumers. We look forward to working with OmniFoods to help showcase [its] premium, preferred alternative to our traditional Garlic Spam Musubi.”

Pokeworks currently operates 65 restaurants nationwide and as it plans to grow to 85 locations by the end of 2022, the chain is looking to diversify its menu with more sustainable proteins. In addition to working with OmniFoods (which also recently launched a vegan fish line), Pokeworks has partnered with aquaculture startup WildType to bring its sushi-grade cultured fish—made from a small number of fish cells in a lab setting—to consumers once the startup gains regulatory approval.

Vegan “spam” is a thing now

Pork-based spam is a staple in many cultures and OmniFoods created a vegan version of it using non-GMO soy, peas, shiitake mushrooms, and rice to give consumers an option that is free from animal cruelty and better for the environment. OmniPork Luncheon initially debuted in Asia, where it made its way onto the menu at McDonald’s locations across Hong Kong and Macau in 2020 before being tested at select locations in China in 2021.

OmniFoods made its US debut in April through a handful of restaurant partners nationwide which used its vegan pork products, including OmniPork Luncheon, in a variety of dishes from lumpia to sushi rolls to musubi. In August, OmniFoods made its retail debut at grocery chains such as Whole Foods Market and Sprouts, bringing the availability of its plant-based products to approximately 40,000 points of sale around the world.

“After our successful expansion in the US over the last six months, we are incredibly delighted to partner with Pokeworks and bring OmniPork to more people and communities as well as fulfill our mission to construct a multi-faceted global ecosystem of future food,” David Yeung, founder and CEO of OmniFoods, said in a statement. “We have no doubt that the new OmniPork Luncheon Musubi will be a success, and we look forward to growing our partnership while taking a stance to support Veganuary and appreciate the impact food can have on our world.”

Currently, OmniFoods is the only company to commercialize vegan spam but it might soon get stiff competition from Hormel, which signed an exclusive partnership with food-technology company The Better Meat Co last year. Under the agreement, Hormel’s venture arm 199 Ventures will work to bring new plant-based meat products to the market using The Better Meat Co.’s unique fermentation technologies, which could result in the launch of brand name vegan SPAM.

For more about vegan spam, read: